The Song of the Ship Rat review 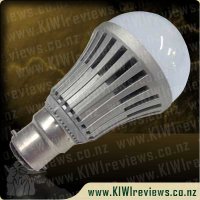 I can recall, when I was a lot younger, that some new fangled bulbs touted to be the saving grace for our environment, and our wallets. Ecobulbs, they were called, and hailed as a technological solution to the huge power cost of standard incandescent bulbs, that seem to expend most of the power they chew up as heat, rather than light. Once you understand how they work though, that makes very clear sense.

These new ecobulbs (or more properly, Compact Fluorescent Lamps/Lightbulbs - CFLs for short) turned out to be a bit of a double-edged sword of Damocles... yes, they run a lot more efficiently, saving you money on your power bill - on average saving you about 80% - a 20w CFL will easily give you the same illumination as a 100w Incandescent. BUT, the big kicker... they may draw less power, thus creating a smaller Carbon Footprint when it comes to the power generation side of things... but they are packed full of juicy juicy mercury - that nasty metal so toxic to our environment. Not so 'eco' after all.

Bring in LED bulbs... built using Light Emitting Diode, these babies are even more efficient and frugal with the electron, pulling half power of a CFL - a 10w LED will give you the same illumination as a 100w incandescent - around 850-900 lux depending on the make and model of the respective bulbs. BUT, be wary of cheap LED bulbs advertised in deal sites and via direct-email (spam) - in most if not all cases these bulbs are not NZ-tested, rated or certified. That's where these beauties stand head and shoulders above the masses of cheap knock-offs. Designed, tested and rated here in NZ, these bulbs are industrial-grade and will last for 40,000 hours or more!

"But what about eco-damage from all the electronics?" Good question - the majority of the bulbs' 150g mass is the aluminium heatsink - fully recyclable. Of the rest, more than 90% of it can be recycled, reducing the environmental impact to the barest minimum, and as the technology matures, that will undoubtedly decrease even more. At present, this bulb is around 90% efficient - meaning that less than 10% of the energy going in is used in operation and waste heat, and that means cooler light fittings - great for desk lamps where you don't want to burn yourself while adjusting the light. It will even work in temperatures as low as -40 degrees and up to 55 degrees Celsius. We couldn't test that directly, but we did find flawless performance as low as -20 degrees and as high as 40 degrees Celsius. Outside that temperature range, and our testing gear was failing!

"Sounds great, but it's so expensive!" It may seem that way at first... but consider this... After receiving a us$10million grant to develop an "affordable" LED bulb, a major company presented a range of four bulbs. The next nearest competitor to the LZ bulb is rated at 12w, puts out only 804 lumens, has an effective lifespan of only 25,000 hours, and costs nz$244! For the same money as ONE SINGLE BULB of this inferior design, you could own nearly *7* of these LZ bulbs! Also take into account the average lifespan of a $1.70 100w bulb is just 1,000 hours. Right there you have the key - $1.70 x 40 bulbs = $68.00 - Pretty much TWICE the price of this bulb, for an equivalent lifespan!

Now, some eco-numbers for those who dig that kind of stuff... changing out JUST these two bulbs has saved us power. That much is obvious... but when extrapolated out, we are going to see a saving of $54/yr JUST on this one fitting alone! Also, these two bulbs reduce our carbon footprint by a further 18kg/yr over the CFLs we had in there before. (A whopping 122.4kg/yr over regular incandescent bulbs!). These emitted a very pleasing 3.6 BTUs per hour - a third of the heat waste generated by the CFLs we were using, and less than 1/20th of the heat wasted by a regular bulb. If these bulbs fail, there's no smoke, no fire, and most pleasingly, no foul smells, unlike CFLs. And, unlike both other types of bulbs, these are not sensitive to low temperatures, humidity or fast-cycling. I can think of many ski fields who should be switching to the bigger versions of these RIGHT NOW!

Overall, these are simply stunning luminaries. Available in two chromic 'temperatures' - warm and cool - these bulbs are going to be your very best bet. "Nah, I'll just keep buying the cheapies thanks." Not for long - plans are already afoot around the civilised world to phase out Incandescent bulbs entirely. As it is, in America the last manufacturing plant has closed down, and imports of even cheaper, nastier bulbs are being clamped down on pretty heavily. As the song says... "The times, they are a'changing..." and so it's time for your lightbulbs to do the same.

This solar LED works by converting solar energy into electricity during the day to charge a small battery, and it lights up automatically at dark. It is suitable for indoor and outdoor decoration with trees, wreaths, etc. LED lights STEADY and FLASH in a string, form a beautiful and fairy world.