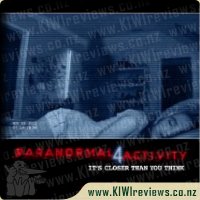 It has been five years since the disappearance of Katie and Hunter, and a suburban family witness strange events in their neighborhood when a woman and a mysterious child move in.

I've seen the first three in this series and I'm really hoping that after this one there won't be any more. This film had so many quiet moments where it was trying to build up suspense so that moments which usually wouldn't make you jump would do just that, but also there were so many plot holes and questions that were never answered.

This film is centred around a teenage girl, Alex, who live with her parents and her little brother. A woman and her son live across the road (Katie from the first two films) and when Katie ends up in hospital Alex's mum lets the boy, Robbie, stay with them. Alex begins to feel concerned when Robbie starts talking to his invisible friend. Alex's boyfriend sets up cameras through the house as strange things begin to happen.

For me, this was not a scary movie as it's all things that I have seen before and it simply felt like a rehash of the first three movies, just set in a different place. I guess if you already own the first three then you should own this, just to have the set, if you have watched the first three, then I guess you should see this one. But I am very glad I only paid $2 to rent this.

Score: 8.9
Product reviews for listing 1848: Alvin and The Chipmunks -  Directed by Tim Hall

Based on the beloved cartoon series, Alvin and The Chipmunks is a family story filled with comedy, heart and exciting music.

After a chance run in with the struggling song writer, Dave Seville, three very special chipmunks, Alvin, Simon and Theodore decide to make Dave's home their own. It's not long before the chipmunks realize in order to convince Dave to allow them to stay they must reveal their talent...not only can they talk but ... more...