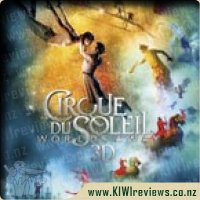 Disclosure StatementFULL DISCLOSURE: A number of units of this product have, at some time, been supplied to KIWIreviews by the company for the purposes of unbiased, independent reviews. No fee was accepted by KIWIreviews or the reviewers themselves - these are genuine, unpaid consumer reviews.
Available:
in cinemas from 21 February 2013

This blew me away. The amount of hours that they must practice to pull off most of these stunts is mind blowing. The muscles they require to accomplish some of the moves are staggering not to mention how limber they must. The four chinese acrobats folding their bodies that way actually made me shudder and found I had my mouth open for most of the show.

A young lady visits a circus and has a fleeting moment with the Aerialist. While performing his show he notices her in the audience and has a fall where he goes to the underworld. She follows and goes through different rooms/stages/curtains to find more amazing performances as she looks for her true love.

I loved the beginning 20 or so minutes where it was just music and tribal sounds but found when they had songs like the Beetles or Elvis that it became too hectic and felt more like a nightmare. The boat scene and the water bowl scene where so amazing that it blew me away watching and when it finished I actually felt like clapping.

I have always wanted to go to Cirque Du Soleil whenever it comes to New Zealand and now after seeing this I definitely will next time it comes. I can not believe the strength these people possess in there arms and legs really is nothing short of incredible. While up in the air they were holding someone up with just there foot and ankle or flipping into a giant cup and managing to manipulate your body in such a way that does not touch the edge just blew my mind.

I found the only times I got bored was the fighting scenes and found they carried on too long but could easily have watched the swimming and flipping for much longer.

I was so excited when I saw this movie was coming to the theatres. I love Cirque Du Soleil, but have never been rich enough to go to a live performance. Well, I could go! But I would be sitting so far away it would not be worth my while. So the chance to get up close to the action, to see everything and for the price of a 3D movie ticket was too good an opportunity to pass up.

We went yesterday, and I bought my two children with me as it is G rated. My eldest daughter watched for about 20 minutes solidly then told me the 3D was hurting her eyes (this has never happened before) and watched the rest without the glasses - which lead to her really just playing in the theatre. That sucked for me because I had baby to attend to as well. Luckily there were not that many people in the theatre, so she could get a run in.

I found the movie utterly amazing though. The 3D didn't hurt my eyes, but a couple of times I got double-vision and the ropes being 3D occassionally confused my mind. I do wish I could have gone to a 2D version but these were harder to find at a time that suited us. In any case, the film is truly spectactular. The action is amazing and the people of Cirque Du Soleil are incredibly strong, talented and graceful. It was everything I hoped it would be and more.

Some of the makeup might have been a bit scary for children, especially the young woman's guide through the first tents. But otherwise a lot of fun, with water, in the air, and a whole section of Beatles music that was so cool. I'm not normally into muscle bound men, but oh my! The men and their sheer strength as they perform and half-nakedness, well.... let's just say if eye candy is your thing, there was an eyeful. Overall, a thoroughly enjoyable film, though I would still stick to 2D with it to avoid distractions.

Finding the courage in each other ... more...