« The Cat in the Hat knows a lot about that: Breeze from the Trees review 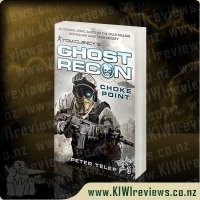 Special Forces operators are renowned for their highly specialised training and courage behind enemy lines. But there's a group that's even more stealthy and deadly. It's comprised of the most feared operators on the face of the earth - the soldiers of Ghost Recon.

When a CIA agent operating in Columbia is kidnapped, the Ghosts battle their way through rebels to rescue the man. But during the operation, they discover evidence of a new terrorist group that's being backed by South American drug cartels and rebel groups.

The Ghosts follow a trail that leads them around the world in a struggle to uncover the group's true purpose, one that could mean billions to the South Americans, aid terrorists seeking to wreak havoc on US soil, and cause economic chaos all over the world.

But as the team chases down their quarry, they soon realise that their true foes have yet to reveal themselves...

I can usually find a way to enjoy any story that carries some cool high-tech gadgets - I grew up watching the sexist but highly gadgetised early James Bond movies - but normally I am not a huge fan of war stories... which, considering warfare is the biggest driver of gadget advances known to humanity, is kinda ironic really. So, despite hints of high-tech on the cover artwork, I wasn't really expecting this to be a hit with me.

It wasn't a *big* hit, but it certainly was gripping enough to keep me reading, yet without any of the heavy-duty blood-n-guts war scenes that so turn me off many war stories. There was action, tension, drama, more action, some more action without guns, a bit more action with guns, travel, a bit of politics, and you guessed it, more gun action... but despite that, the story still attempted to give some background on the characters, make them accessible and easy to empathise with, and generally be a story more than a verbal run-through of an action-movie trailer.

To be honest, this struck me as a slightly more militarised version of many of Clive Cussler's better novels - more of the Oregon Files series than the Dirk Pitt series. It had a good - if somewhat predictable in places - plot thast really didn't feel like it covered enough time to have everything happen in it... a bit like the Doctor Who TARDIS - it felt like there was far more in it than the time available would allow. This is not always a bad thing... and in this case it felt good, it gave the reader a chance to absorb what can happen in a few split seconds in a firefight, without feeling like it was being crammed into my eyes.

I was intrigued by the inclusion and use of multi-terrain UAVs - or drones. I was particularly impressed with the design of the main drones in use - Compact enough to fold up and fit in a belt pouch, but with air and ground modes allowing it to fly to a suitable landing area, then drive to it's target location with minimal noise. The optical camo suits are a weekend-warrior's wet dream, but still a long way from practicality even with today's advances in flexible display technology. However, it is a believable technology and as such fit well into this story, was used appropriately and often enough to make it a mainstay but not enough to make it annoying.

Overall, taking into account my initial reluctance, and the fact this is my first encounter with the Ghost Recon universe, I was fairly impressed. I think I could handle a few more stories in this series before I would make any decisions about it being in my "can go to" list or not, but it certainly made a good enough first impression on me that it gets a place in my "worth considering" list for sure.

The crickets chirped, the dogs barked, the cows mooed and the sheep maaed. The horses knickered to their foals and foxes howled, as they came out of their holes. How will Farmer Hayden ever get to sleep with all this noise?