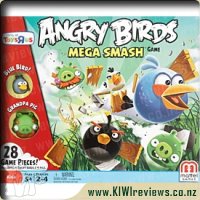 Angry Birds is a highly addictive computer game available on mobile phones, tablets, and other devices. I would have happily remained blissfully ignorant of the game all together, except my husband downloaded it to his mobile. Next thing I know, my daughter is playing it at all opportunities. Then he is downloading other versions, and she is playing those. So when we saw this live-action game in the Warehouse, we had to get it.

My daughter loves playing this game. We have to wait til baby is having a nap, because there are so many cards to be destroyed and little pieces to eat. So once we have that naptime freedom, out comes the box. We get the cards out, and there are a few ways to play. You can do freestyle building of the piggie forts, by picking cards that only tell you what blocks to have. Or you can pick to build something already designed. These cards offer different levels of difficulty. But because my daughter is always looking at being creative, we freestyle the forts most of the time.

I think the game has great potential for early maths and patterning learning. There's also a bit of science (physics) in there. Though to be fair, the slingshot can be a bit hit and miss too. Still, we are learning and playing a game at the same time. When the piggies and birds are not playing the game, they can sometimes be found hanging out with my daughter's Littlest Pet Shop animals too. So it's really more than a game for her. This was not the pack we were originally looking at, but it has heaps more figures and pieces than the other packs we looked at. So the value for money was higher with this one. We plan on buying some of the add-in expansions later as well.