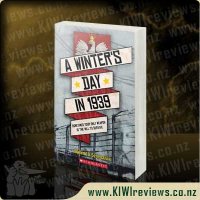 A Winter's Day in 1939 product reviews

Sometimes in war the toughest enemies are starvation and disease.

Taken from their home, forced to leave their country, put to work in labour camps, frozen and starved, Adam doubts that he and his family will ever make it out alive.

Even if they were to get away, they might freeze to death, or starve, or the bears might get them. For the Polish refugees, the whole of the USSR becomes a prison from which there is no escape.

I am a big fan of historical novels and I enjoy reading about periods in history that I don't know much about. So this book really appealed to me in a lot of ways. I have studied the Second World War several times from a few viewpoints, but never from the Polish point of view. I didn't know much about Russia during that period at all. For that reason I thought it was a good educational read.

I opened this book a few days ago, and have been steadily reading a handful of chapters at a sitting. I wouldn't say it has been an easy read though. The writing is really good. Szymanik has a good talent for describing the scene, and really putting you there. I felt the characters' panic, and their grief at times. My mind clearly painted the pictures because the author did her job very well.

For the mother in me though, she did it a bit too well. Some of the scenes even right from the beginning of the book were just too much for me. I ended up losing a few hours sleep, not from reading but from my mind reeling at what these poor people endured. I like that the book touched me so much and what I took away from that. But I guess what I'm saying is, I wouldn't recommend it if your pre-teen or teen is a sensitive soul.

Score: 9.3
Product reviews for listing 1021: I Didn't do it for You: How the world betrayed a small African nation -  Written by Michela Wrong

Scarred by decades of conflict and occupation, the craggy African nation of Eritrea has weathered the world's longest-running guerilla war.

The dogged determination that secured victory against Ethiopia, its giant neighbour, is woven into the national psyche, the product of a series of cynical foreign interventions.

Fascist Italy wanted Eritrea as the springboard for a new, racially pure Roman empire, Britain sold off its industry for scrap, the United States needed a base for its state-of-the-art spy station, and the Soviet Union used it as a pawn in a proxy war.