« The Amazing Spider-Man vs The Lizard review 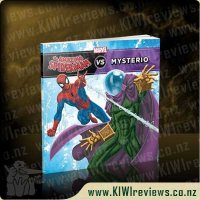 Mysterio is a master of illusions, and he's convinced the world that Spider-Man is a Super Villain! Can Spider-Man prove that he's a hero and take down this clever trickster?

Okay, I originally thought that this book was going to be cool, but this isn't exactly what I expected. The book wasn't entirely lame beyond all reasoning, but it wasn't all that great for me either. The artwork was awesome, it was well-done and the colours weren't too bright and were blended smoothly. The storyline was okay, though it sounded a bit sassy and there wasn't a lot of action. Mysterio seemed cool and I am really hoping that he makes it way into the next Spider-man movie.

I found the story as one that wasn't really my style, but I am just putting it down to the fact that this is a kids book, so this is only going by opinion only. By looking past the whole "child-based" aspect, it isn't actually all that bad! I also liked the fact that now I know Mysterio's origins, I had always wondered who he was before he became a super-villain, but now my curiosity has been satisfied.

The price is great, nice and cheep but not as cheap as dirt, so it gives a good representation of the book's value which matches the price perfectly. I don't know about reading the book again, I think I might put it aside for my little brother to read. Apart from all of this, there really isn't much to say about this book, so I hope that your child enjoys it, ciao!

Miss Four and Miss Six loved this book. So far we have enjoyed all of this series of books and the Amazing Spider-Man vs Mysterio didn't disappoint.

Every page is full (or almost completely full) of glossy illustrations to support the text as Spider-Man fights Mysterio to show who the real hero of New York is. The text is very simple and Miss Six is able to read this with a little help. Miss Four just enjoys "reading" by looking at the fantastically detailed illustrations which do almost render the text unnecessary.

I really enjoy getting to know more of Spider-Man's adventures and use these books to explain different values and morals that are important in society.

I think this is perfect for the age 4 and up age group - possibly more so for boys - though my girls do really enjoy these books. A great gift or reward for any Spider-Man fan.

Score: 8.8
Product reviews for listing 743: Dancing with Cranes: On location with a New Zealand wildlife film-maker -  Written by Alison Ballance