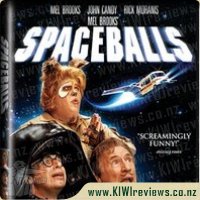 Princess Vespa, whose hairstyle surely ranks as one of the universe's oldest creations, is kidnapped by the evil Dark Helmet. But fear not! Lone Star and his half man, half dog sidekick Barf, blast into action in their space Winnebago, struggling against time (and their own limited intelligence) to rescue the Princess. Along the way they'll confront the gooey Pizza the Hutt, a sassy robot named Dot Matrix, and a little creature called Yogurt who possesses the mystical power of the Swartz. The gags fly faster than laserblasts as the fearless and clueless space heroes wage interstellar warfare for life, liberty and the pursuit of massive merchandising opportunities.

Lampooning everything from 'Star Wars' and 'Alien' to 'Planet of the Apes', this hysterically funny space oddity will send you into hyperspace with fits of laughter!

Four Kids and It

Let me get this out there, right off the bat, I simply cannot stand Pizza the Hut, he just grosses me out! There, that's my one gripe about this film. So, this film came out in 1987, which means I've been watching it for 25 years (naughty dad playing this in front of a toddler

), and 25 years later, I still find it one of the funniest movies ever.

This is mainly a spoof on the Star Wars trilogy (the originals, not the horrid 3 prequels) with a couple of other jokes and spoofs on popular films of the time. Princess Vespa has been kidnapped by Dark Helmet who wants to hold her for ransom, seeking all the fresh air on her home planet as payment for her life. Enter Lone Star and his Mog (Half man half dog "I'm my own best friend") Barf who agree to rescue her in exchange for enough credits to pay back Pizza the Hut.

Enter chases through space and jokes aplenty, from Yoghurt (Mel Brooks) who is all about the Shwartz and merchandising to fights on Spaceball One. There are jokes galore in this film, some that have me cringing and most have me laughing time and time again.

If you likes movies that happily take the mickey out of popular movies, lots of goo (and bad) jokes then this is the film for you. Utterly brilliant and still funny 26 years later.

Robert McCall (Denzel Washington), a man of mysterious origin who believes he has put the past behind him, dedicates himself to creating a quiet new life. However, when he meets Teri (Chloë Grace Moretz), a teenager who has been manhandled by violent Russian mobsters, he simply cannot walk away. With his set of formidable skills, McCall comes out of self-imposed retirement and emerges as an avenging angel, ready to take down anyone who brutalizes the helpless.