« The Cat in the Hat review 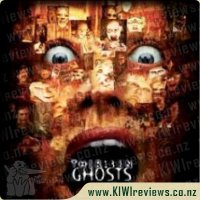 When Cyrus Kriticos, a very rich collector of unique things dies, he leaves it all to his nephew and his family. All including his house, his fortune, and his malicious collection of ghosts!

I was quite surprised by the quality of frights that this film created. The entire beginning to the story seemed incredibly corny and overly "steampunk", but overlooking the strange plotline, the guts of the movie were thrilling.

The premise involved a family trapped in a house with a collection of ghosts that are of course invisible to the naked eye. There is a lot of weird and wonderful technology inserted into this film to try and explain away plot holes, but in a horror, it doesn't really matter that much. I quite enjoyed this film, and despite the fact that I was rolling my eyes during several parts in the opening scenes, I ended up on the edge of my seat, unable to sleep until I knew how the film ended.

The computer generated effects were well done, and I did like the appearance of the ghosts (What? how can you see the ghosts if they are invisible? It's not like they have some sort of spectre spectacles?) Not the most scary horror of all time, but an enjoyable film, with an outlandish storyline, that kind of has you rooting for the ghosts by the end of it.

Would I watch it again? Yes.
Would I pay to see it again? Probably not.

I'm not a huge fan of horror movies, I am getting used to them, thanks to hubby's love of them, but I'm still not a fan and would watch horror movies last if I had a choice. This movie, to me, is one of the horror movies that tries to get more of it's kicks out of mild spookiness and lots of blood and gore.

We have a recently widowed father of two, find out that his uncle has died, leaving them a very impressive estate, including a fantastical house full of wondrous items, and glass walls everywhere. Of course, all is not as it seems and things soon enough start to go wrong in a horrifying way.

The special effects in this are good, and they deliver what is expected, blood, gore and jumps aplenty. The plot isn't that great and there are a couple of plot holes in it, but when you're relying on scaring your consumer there isn't much concern for a plot hole I assume.

While this is a better film than most horror movies out there, it still isn't anything fabulous.

Join Time Team on an archaeological discovery of Britain's past.

13 riveting episodes set in diverse locations from Barra in the Western Isles to Dungannon in Northern Ireland. Time Team have only 3 days at each location to excavate, retrieve and unearth history from the Palaeolithic to the Industrial age.