Home > Categories > Movies > Family > The Cat in the Hat review 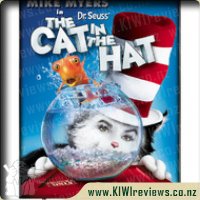 The Cat in the Hat product reviews

I love Dr Suess and I love the Cat in the Hat. When this movie came out I was excited to see it I had grown up with the Grinch and loved that movie so was hoping this one would be as good. Although I enjoyed it and it was a really funny movie it wasn't one of the better family movies I have ever watched.

It follows along the basic lines of the Cat in the Hat book with lots of other things thrown in in order for it to become a full length movie. But basically the Cat in the Hat turns up while the children are home with out their mum and the house gets all messed up and they need to clean it all up before the mum gets home.

There are lots of funny moments as the house becomes absolutely trashed and the mums boyfriend gets what he deserves with the help of the Cat in the Hat. You certainly wouldn't want the cat in the hat visiting your own children. I think this one is better for young children than the grinch as it doesn't have any scary moments in it for the younger children. Of course there is a lot of humour that is more aimed at the adults but still things that will have the children laughing.

This is one movie that I wasn't too sure about. Mike Myers is not someone that I would cast in a family film, not with everything else that is in his resume. I still wanted to watch this as I grew up with Dr Seuss books in my house and was keen to see it brought to life. Kinda wish that I hadn't gone to see it at the cinemas.

For those who don't know, the basic storyline is that Sally and Conrad have been left home alone on a wet and miserable day. In comes The Cat in the Hat to bring a dash of craziness to their day and teach them something along the way.

The movie version has of course been adapted to make it a feature length film and add a bit more drama as this movie features their mother and her scheming boyfriend. The kids did a great job, the special effects were fabulous, there were some great moments, but the attempt at humour for the adults was a little too much for me and was too adult if you get what I mean.

This is a fun movie, if you watch it once every, let's say, five to ten years... We own it, as it was on mega special, but the kids have only watched it once, it's just not a film that they enjoy or that I see anything too special thanks largely to Mike Myers.