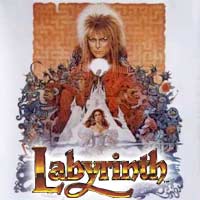 Gothic Fantasy which pits living and breathing actors Jennifer Connelly and David Bowie against a motley collection of Muppet monsters. The film centers upon teenage Sarah (Connelly) who lives in a fantsy world of myth and magic, evil spells and wondrous enchantment.

She is babysitting her little brother when she cavalierly wishes that goblins would take him away. She gets her wish and a coterie of goblins adduct him. She then encounters Jareth (Bowie), the ruler of a mystical world one step removed from reality. He tells Sarah that the only way to get her brother back is to find her way through the labyrinth and find the castle at the center.

As she makes her way through the maze, she faces a number of horrific challenges before she finds her way way to the gravity defying castle, where her brother is being held by the evil goblins.

OMG I loved this movie as a child. I remember many times happily saying the above line before breaking into song; I saw my baby, crying hard as babe could cry...what should I dooooo? lol *fond memories* So it was only natural that when my children were old enough I would get a copy for them to see (along with ET, Gremlins, Grease and Dirty Dancing lol).

Even now some 20 years later lol the movie is still amazing. Naturally the visual effects and make-up are nothing like they would be if the movie was re-released now, but they are still amazing none the less. The movie is very 80s but with Jim Henson and George Lucas working together it was bound to be an amazing masterpiece of puppetry and special effects, an absolutely gorgeous children's fantasy movie, adored by children and adults everywhere.

Children of the 80s who got to enjoy this great classic at its best may remember some wonderful one liners such as "Was that my stomach or yours, Ambrocious?" or how about "Ludo, call the rocks!" and no matter how we felt about the movie we all had a favorite little creature from it

And as odd as Bowie looks in that movie now, so many girls thought he was just the bees knees back then lol

I believe I introduced the movie to my youngest two children too soon, as my youngest was scared by it and my second youngest was bored, whereas my oldest son absolutely loved it!

I watched this movie often when I was a child, it was one of my most loved films, and now my children get to enjoy it as well, which is great for me as it's a walk down memory lane. The characters created are so endearing and still just as wonderful as they were when I was a child.

The music, the costumes, the puppets, all fantastic, and even though the special effects are so obvious (and what else would you expect from a film this old), it's still just as easy to get lost in the movie and start singing along with David Bowie. Can't wait to play it for my grandchildren, as I know I will still love it then just as much as I do now.

Labyrinth is my all time favourite kid's movie ever! Take David Bowie (my all time favourite male singer ever), add a storyline with one foot in the present and the other in delicious fantasy. Muppets, music, friendship and adventure. Well, you get the picture I'm sure.

I first saw this when it came out in the 80s at the theatre. I own the CD soundtrack, which David Bowie wrote especially for the movie. I have it on DVD with the wonderful "making of" documentary as well - if you watch it you'll see the choreographer is the "dancing doctor" on Star Trek: Next Gen! Cat from Red Dwarf has a vocal appearance too as two of the Fireys.

I love this movie so much. It has hardly dated at all. All the jokes are still funny. Even my 4 year old loves this film and requests it regularly.

This movie is also about the screen again on the big screen in Hamilton as part of a retro film festival at Event. I'm just waiting to see the movie times!

Love this movie, alway have!!! I have always been a fan of The Muppets and Jim. Great story great ending and no matter how many times i watch it, i still LOVE it

I would definitely have to say that this movie is one of my favourite Jim Henson movies. As per usual, his 'Muppet' characters are believable and I personally felt for Ludo when he was released from the rope trap and landed on his head.

as for the musical numbers... they are of a calibre we have grown to expect from the talented David Bowie.

This movie, in my mind, is one that deserves a place in my DVD collection. Just as soon as I can find a copy that doesnt cost an arm and part of a leg... :(

CLASSIC! What else could you label a movie like this. For it's day, it had cutting edge special effects, though to today's trained eye they are quite sloppy in places. So saying, even to today's trained eye, some of the effects are SEAMLESS! And taking into account the high level of 'real world' machinery that had to be employed due to lack of CGI capabilities (as proved by the owl in the opening sequence) it was remarkable to the extreme.

I was so impressed, I had to order a copy on DVD from half way around the planet, to ensure I got a copy into my collection! The video tape was starting to wear thin in places, I watch it that often. It is also a hit for my son, who, at the tender age of 3, is already aquiring a firm taste for good storyline movies.

I really don't think I need to rave on about this one. If you have any taste, you will stop reading this and go out and hire or buy a copy, so that you can enjoy the wonders of imagination brought to life by Jim Henson and his muppeteer mob, inspired by fantasy stories and Escher, and given depth and character by the beautiful Jennifer Connelly (Sarah, lead character and spoilt bratt of a teenage girl) and highly talented David Bowie (as Jareth, the Goblin King.)

Now an even more fearsome alien threat has been unleashed on the world and Jake is called back into action by his former co-pilot, Lambert (Scott Eastwood) and a 15 year old Jaeger hacker, Amara (Cailee Spaeny). Rising up to become the most powerful defense force to ever walk the earth, they will set course for a spectacular all-new adventure on a towering scale.