« The Gods Must Be Crazy 2 review

ProdID: 3783 - The Boat That Rocked
Directed by Richard Curtis 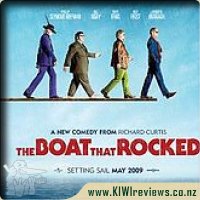 The Boat That Rocked product reviews

"The Boat That Rocked" is an ensemble comedy in which the romance takes place between the young people of the '60s and pop music. It's about a band of rogue DJs that captivated Britain, playing the music that defined a generation and standing up to a government that, incomprehensibly, preferred jazz.

The Count, a big, brash, American god of the airwaves; Quentin, the boss of Radio Rock -- a pirate radio station in the middle of the North Sea that's populated by an eclectic crew of rock and roll DJs; Gavin, the greatest DJ in Britain who has just returned from his drug tour of America to reclaim his rightful position; Dave, an ironic, intelligent and cruelly funny co-broadcaster; and a fearsome British government official out for blood against the drug takers and lawbreakers of a once-great nation.

As soon as The Boat That Rocked came out, I wanted to see it. I am a dedicated follower of all great English films. The screenplay was written by Richard Curtis, who has written a lot of fantastic films and tv too. Four Weddings and a Funeral, Notting Hill, Love Actually, Blackadder, to name just a few. Its star-studded cast was a big drawcard too. Bill Nighy who looks as good in a suit as he does without it. Rhys Ifans who I first became aware of in Notting Hill. Nick Frost who is always funny, even without Simon Pegg and our own Rhys Darby too.

This film is essentially about pirate radio in the 60s. But its also about the fight for freedom from censorship. The right to think for and make decisions for oneself. Its about fun, and the innocence of the 60s too. It has all the fun and humour which comes from a group of men out at sea for a while. The parties are wild, the characters living what seems like a dream. Some attempt to hide behind a mask of mystery and sullen-ness. Others are charismatic and draw you in. You don't get to see too deeply into their souls and what drives them. But then its the 60s so no one is off talking to their shrink. They just drink up and have another shag basically.

Of course this makes it very blokesy and there's not much room for PC thinking. But I think that's the fun of it. It is quite long and it does meander at its own pace. Though I enjoyed it the first time through, I haven't watched it again since because of the length of it. Its a good film to enjoy with a group of friends though, if you want to have a laugh over some drinks and popcorn.

If you like music from the 1960's and you like comedy then this is the movie for you. Set in 1966, a small group of men (and one woman) are stationed on a boat, in the North Sea, broadcasting rock and pop music 24 hours a day, 7 days a week, much to the governments annoyance.

Young 18 year old Carl is sent to the boat by his mother as an attempt to straighten him out, something that is seen as rather strange seeing as there is sex, drugs and alcohol on-board the boat. So not really the right place to go if you want someone to straighten out.

Each character on-board has their own quirks, and it really is a great ensemble of a cast. You have your very shy DJ, your very sexual DJ's, those who work in the background, the ships cook etc. There is plenty here for everyone. There's drama between characters, a little bit of action, plenty of laughs, some romance and GREAT music.

Even if you didn't grow up in the 60's the music selection is really quite wonderful, and most of the songs you will have heard at some point or another unless you live under a rock. Well worth a watch.