« The Cabin in the Woods review 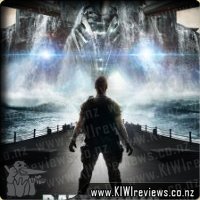 Based on the classic Hasbro naval combat game, Battleship is the story of an international fleet of ships who come across an alien armada while on a Naval war games exercise. An intense battle is fought on sea, land and air. What do the aliens want?

There is little to say about this movie. As do most movies that have been created since the release of transformers, it employs a wide range of electronic sonic booms to let you know that evil mechanical things are happening. The entire basis of this movie relies on the fact that alien ships would only attack once when fired upon, and would move a consistent predetermined distance each time.

Of course this is based on the Battleship board game and was probably created to try increasing the sales of the classic game. But a blockbuster movie it does not make. Even adding Rihanna to the cast did little to improve the calibre of film, and actually had the opposite effect in my opinion. The idea that the underdog wins is prevalent in most plotlines of movies, but the idea of a man who was almost kicked out of the navy, suddenly being next in command of navy ships, is preposterous. The side story of the wounded veteran, helping out in the fight against the alien threat is also just as farfetched.

The movie consisted around America kicking arse, using their wounded, their veterans, and the oldest warship (that is a museum, but still fully functioning, with working ammunition.) to take down a bunch of highly advanced aliens that came out of nowhere for no real apparent reason. I personally did not enjoy this movie. Unless you would enjoy watching Rihanna dressed in navy khakis, I would give this movie a miss.

Right... So a movie... Based on a board game.... When I first heard that studios were in talks about turning Battleship into a feature length film, I was a bit, confused, to say the least. I mean, a movie, based upon a game where you take turns trying to sink your enemies ships...? Seeing the ad for it, they decided to turn it to aliens attacking, not human enemies, and I could understand that.

The movie wasn't anything special. The bad boy turned Navy officer who falls in love with the daughter of his boss, who doesn't like him at all. Throw in a brother, the sidekicks and the tension with another naval officer and there's your movie mix.

The special effects were pretty good, done well for the movie, looking clean and flawless. The plot was fine but nothing new. It took me until the last half hour of the film to actually enjoy it. That was where the action and the comedy was. Not that great a movie, and one I won't hire or buy, but if it's on TV with nothing else good on, then I may watch it again.

In the irreverent spirit of fun that made ÔťThe LEGO MovieÔŁ a worldwide phenomenon, the self-described leading man of that ensemble Ô" LEGO Batman Ô" stars in his own big-screen adventure: ÔťThe LEGO Batman Movie.ÔŁ But there are big changes brewing in Gotham, and if he wants to save the city from The Joker's hostile takeover, Batman may have to drop the lone vigilante thing, try to work with others and maybe, just maybe, learn to lighten up.