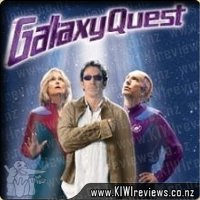 Sci-fi spoof in which Tim Allen, Sigourney Weaver, Tony Shaloub and Alan Rickman star as actors from a 1970s sci-fi TV series 'Galaxy Quest', which was cancelled after four years of broadcasting.

Twenty years on, the show is repeated on television and aliens, under attack, mistake the transmissions for historical documents and beam up the aging actors in order to save the universe. But the cast have no script or director to help them.

When I first watched this movie, it had only recently come out, and I was still very much a Star Trek girl. I knew that it was a spoof, and from the couple of people that I knew, they felt that there were many a joke spoofed from Star Trek, such as the captain having a 'look at me, look at me' mind frame, your 'Red Shirt' crew member etc.

This came out in 1999, so I was only 11, and still watching a lot of Star Trek. The first time I watched it, I got all the jokes, which would be thanks to my parents, especially my dad, and all the sci-fi that I watched with them. That being said, this movie is funny enough without having watched Star Trek and the likes.

When I was 11 this was a great spoof on Star Trek and TV shows of the same genre. But as I grew, it stayed funny, and not just because of the 'Trekkie' jokes, but simply because it is funny, and the jokes, the humour are done well. It stands alone, you don't need to be a fan of sci-fi to enjoy this film.

I have watched this movie at least 10 times since it came out, and I still find it just as funny as I did the first time. As I grew, so did my enjoyment of this movie, I watched it just a week ago and there was a joke in there that I had never gotten before.

This is a fun movie and one that I would recommend to any comedy and or sci-fi lover.