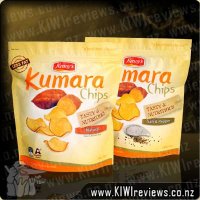 Potato chips are a kiwi favourite. Whether it's at a picnic, a family BBQ, drinks with friends, at the beach or hiding in the pantry, we love to rip open a packet of chips and munch away. But, as we all know, they're not the healthiest snack option! Finally, a healthier alternative has arrived.

Kenny's Kumara Chips are made from one of New Zealand's favourite veggies which also happens to be a nutritional all-star! In fact, kumara is one of the best vegetables you can eat and is ranked as number one in nutrition of all vegetables*.


* The Center for Science in the Public Interest, Washington DC
** Minimum 25% to 50% less fat compared to the leading brands of ready salted potato chips.

Cleaning Your Microwave with Lemons
Rating: 10.0

I am a kumara fan, but no one else in my little family is. My husband has this thing about any starchy vegetable that is sweet and my eldest has followed suit with him. I'm still holding out hope for baby. But in the meantime, I enjoy them on my own. I like hot kumara chips, even though they are often really soggy. It's the flavour I love. So I was interested in trying these kumara chips, to see what kind of consistency they could get. The great news is, these chips are really crunchy. I don't know what I was expecting, but I guess I was thinking they would have a bit of give and be a little rubbery. These are instead, dry, jacketed with an oily kinda taste (especially noticeable when you try the natural flavour). The sweetness of the kumara is in the after taste.

My eldest daughter would not touch these chips at all. She felt that the bag smelt funny, and when you lean your head in it does have a very oily smell about it. My husband was not too fussed. He tried one but then didn't return for more. So basically I had the bag to myself and I was fine with that. I like the bags because they are resealable. What a great way to at least encourage your customer base to limit their serving sizes. For me, since I'm eating alone here its great to be able to reseal and go. Though I did find some of the flavours in the range were a bit too nice and I could not leave them alone.

My least favourite had to be the natural flavour. I still happily ate the packet, but it just didn't have a lot of flavour for me. I would have liked a bit of salt to flavour them. I know that's not natural, but I wish the salt was there. The salt and pepper ones had a good amount of pepper for my palate but were again less salty than I would want. That flavour would be my 2nd choice of the range. My favourite by far was the sour cream and chives. I would have thought that the sour cream flavour would make the chips sweeter, but it didn't seem to affect it too much.

Okay..I am on the fence about Kenny's Kumara Chips, I am not totally sure if I like them or not. I love eating kumara chips hot, so trying them in a potato chip fashion just seemed weird to me. But they were recommend to me to I had to check them out. I did appreciate the amount of flavouring on Kenny's Kumara Chips...it is flavour you can actually see and taste. I bought a packet of the salt and pepper and it was nice seeing the sprinkles of black pepper on the surface, I also bought the sour cream and chives and I could also see the great amount of flavouring, both flavours were nice I must admit, usually I am not a fan of the sour cream and chives but that flavour was yum.

I couldn't get passed the sweetness of the kumara within the chip...yes they are kumara chips so they are meant to be sweet but they aren't chips as I know them!! Also I am not sure if my two packets had been miss handled but both lots of Kenny's Kumara Chips were full of broken chips, there was only a handful of decent sized chips to scoop into the dip as I needed to test them out fully. They pass the dip test with flying colours too as Kenny's Kumara Chips are cut thicker and by leaving the skins on the edge of the chip adds extra support, and not to mention better flavour in the long run of things.

Yes I will be buying more, I love kumara way to much not to give these Kenny's Kumara Chips a second go, plus they are nutritionally rich, and lower in fat which is always a double bonus, plus they they are chips, maybe not potato chips but kumara chips so I am definitely putting them on my shopping list to keep for snacks as I think the resealable bag is so super handy!! and I can't wait to use them at my next family or friends gathering as I am sure they would enjoy Kenny's Kumara Chips.

I like the packaging as well, I like the flat bottom on the bottom of the packet, they are easier to store in the cupboard as I can stand them up rather than having to lay them down like potato chip packets. The yellow and natural looking packaging I appreciate too, nothing flashy which I prefer, and usually tend to buy more of as I know the less flashy the more nicer the product usually is.....the flasher the packaging the less tasty the product usually is. So rest assured that when you buy to try Kenny's Kumara Chips you will be in for a treat, if you like potato chips you must try these.

Ok I totally love Kumera Chips (hot) and any other kumera products so was keen to try these out. My fiancee likes kumara but doesnt love it like i do so i knew he would be a real tester for these. I brought a packet of sour cream n chives as well as the salt n pepper flavour, both of which we tried by themselves and not with dip or anything.

We tried the sour cream and chives flavour first on a car trip south ~ i loved that the packet was bright so i didnt loose it amongst all our other stuff packed into the car. And i found myself reading the health facts on the front of the packet as soon as i picked it up ~ so it must be eye catching! I totally love that these are such a healthier alternative to chips! It made me feel ok eating them instead of feeling totally guilty. The flavouring was great ~ could definately taste sour cream n chives as well as the kumera flavour but neither flavour was too overpowering. I loved these and over a couple of sittings we finished the packet with ease. I liked that the skin had been left on and the chip is quite thickly cut which is great. This flavour i will definately be buying again for ourselves and to take to others for BBQ's etc.

The salt n pepper flavour we werent so keen on... At first it tasted plain, like there wasnt any flavouring except you did get that sweet kumara taste, which is quite hard to get used to when its in a chip form an no other flavouring.. then all of sudden a piece of pepper would hit and give that extra bite/not nice taste. Even though it had all the other benefits the same as the sour cream n chives the taste was enough to put me off. I wont be buying this flavour again for ourselves but will for others who i know will like them (so it totally is just personal taste here). I already brought these as part of a food parcel for friends and they were a great hit.

In general i totally loved this product ~ tasted great, looked great and great health benefits! Totally recommend to others to try! :)

We're always being told the key to healthy eating is to be prepared and have healthy snack options on hand. Bliss Bites, Handcrafted by Loaf, to the rescue! We've used all the nutrient-packed raw ingredients that you would use at home, free from gluten, dairy and wheat and packed them together into bite size pieces, individually wrapped so you can just grab them from your desk draw/hand bag and starve off the hunger pains until the ... more...