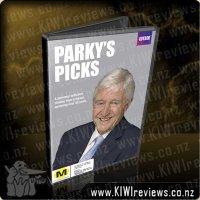 Disclosure StatementFULL DISCLOSURE: A number of units of this product have, at some time, been supplied to KIWIreviews by the company for the purposes of unbiased, independent reviews. No fee was accepted by KIWIreviews or the reviewers themselves - these are genuine, unpaid consumer reviews.
Available:
December 2012

Sir Michael Parkinson has personally chosen his favourite and most ground breaking interviews for this exclusive to DVD release. Having interviewed some 2000 names over a career that has spanned 40 years, Parky looks back and chooses the interviews that were the most entertaining, eye opening, informative and just his plain favourites. This release includes extended never-before-seen clips giving more of an insight in to each guest.

SPECIAL FEATURES: Behind The Scenes featurette

I grew up watching Michael Parkinson on television with my parents. I daydreamed of working at the Beeb and getting interviewed alongside my favourite comedians and movie stars at the time. The Beeb really knew how to make a great talkshow, and Parkinson was a classic example. He was a journalist, who knew his craft and how to ask questions in an interesting way. I recently read Parky's autobiography and was fascinated by the man and his career over the decades. I couldn't wait to watch this DVD.

This DVD doesn't have whole episodes. Instead its a long chain of partial interview snippets from personalities. Each new person is introduced by present day Parky, which is neat. I found these bits a little too short though and a bit stilted. Still the great man, but a little stiffer I guess. The archive footage was awesome though. Some of the personalities I hadn't really heard of. That didn't matter because their stories were historically interesting to me, or funny. Of the people I had heard of, these were even more exciting to me. They showed footage I had never seen (because the shows aired before my time) and footage I could easily recall as well.

In one or two parts I near peed myself laughing. In one or two places I felt like crying. It was a bit of a roller coaster, but always the amazing feeling and style of the original talkshow. One thing the BBC failed miserably at in the beginning, was deleting old shows as soon as they aired. Many great names have commented on this in books and on TV over the years. To think of the segments of film that have been lost because they couldn't imagine anyone wanting to see a repeat performance! That's why collections like this are so special and important. They are moments in time on film captured and saved.

The only thing I would have maybe changed was, the way its just one giant string of show. I would have cut it into episodes so you could play all or play part. You do have the opportunity to scene select, but it plays on if you scene select. I really liked the featurette, because it was more opportunity to see present day Parky. The short intros could have been a bit more lively. Overall though, this is a good collection and a good follow up from the first one.

Ben "Finn" Finnegan is an affable, modern-day treasure hunter who is obsessed with finding the legendary 18th century Queen's Dowry - 40 chests of priceless treasure that was lost at sea in 1715. In his quest, Finn has sunk everything he has, including his marriage to Tess. Just as Tess has begun to rebuild her life, working aboard a mega-yacht ... more...