ProdID: 3632 - Nightfall
Written by Will Elliott 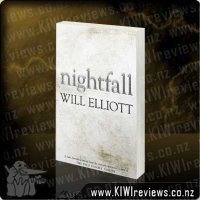 Aden awakens naked in a bath tub, knowing only that he is dead. His new world is Nightfall, a place filled with characters bizarre, grotesque and magical: Julius the duke, the monstrous Gorr family, the goddess Muse, Slythe the deadly assassin. On the night Aden awakens, the Forgetting closes in, erasing everything it touches. Aden has little time to discover why this world and its characters seem so familiar to him, and why they call his grandfather the Worldmaker... and he must work out if he is here to save this world, or to help destroy it.

An intensely written story in a wonderfully strange fantasy world, it leads us into thinking about the nature of storytelling and structure, reality and imagination, and gives us a wildly entertaining story with some unusual and endearing characters.

Nightfall tells the story of Aden, a young man who wakes up in a bathtub in a strange land having just committed suicide. As Aden starts to explore this strange land, he learns that it is being destroyed by a slow moving boundary, and that he is probably the person who holds the key to save it all. The problem is that because he has already died once, he's not really that sure about what he should be doing, and if he can be bothered doing it, when really, he should be at rest. Yes, it's that heavy, right from the very first page, complete with a steep learning curve.

The first chapter is very dark, very confronting, and full of some very grotesque imagery (so I would suggest that you aren't eating at the same time as reading), but this is not reflective of the whole story, so you just need to get past the first 2-3 chapters of the book and you're away. While the heavy themes are always there, they quickly give way to curiosity as Aden explores an eclectic world full of very bizarre imagery and characters. If you spend the time really thinking about everything that is going on, then the end might not be as surprising for you as it was for me, but once I read the ending I could see where those bits had come into play. The way in which Elliott times his reveals is excellent, but what he does once you have been given those reveals verges on the masterful.

This is where the emotion takes over - figuring out the premise for the whole story. Aden has to figure out what he wants to do in this strange world. Does he let things continue on as they are, or does he try and save it, knowing that the longer he takes to decide, the less there may be to save.

The characters of Nightfall are as strange and varied as the world they populate. When you're reading, you feel like you know them, that you've met them before (or people like it), yet at the same time they are so strange, their actions so odd, that you just can't grasp as to why they are the way that they are. All the characters have been written so well, that you feel like they are old friends, not just something new concocted by someone writing away on a typewriter. I found myself very eager, the further in to the book that I got, to find out just what Aden was going to do, and how his character was going to evolve.

A good book that I will be passing on to others to read.

Welcome to Heartside Bay - for life, love and everything in between...

Polly Nelson is not interested in the boys at Heartside High School. Ollie Wright least of all. He's sports-obsessed, girl-crazy, and way too good looking. Plus, he's dating her best friend. But she just can't stop thinking about him... until she meets Sam. Smart, caring and passionate, Sam is just what Polly wants, and it seems like he's interested in her too. But can she forget about Ollie?