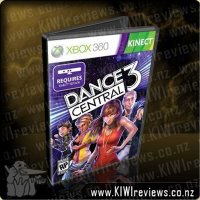 Disclosure StatementFULL DISCLOSURE: A number of units of this product have, at some time, been supplied to KIWIreviews by the company for the purposes of unbiased, independent reviews. No fee was accepted by KIWIreviews or the reviewers themselves - these are genuine, unpaid consumer reviews.
Available:
October 2012

Dance Central 3 is an upcoming music video game developed and published by Harmonix Music Systems and co-developed by Backbone Entertainment.

Gameplay is similar to the other two games in the series in which players follow dance moves which are tracked by the Xbox Kinect. The more accurately the players dance, the more points they earn. Harder difficulties mean harder moves for the players to follow. New to Dance Central 3 is the Crew Throwdown mode where two teams of up to four go head-to-head in a series of performances, dance battles & mini-games.

There will be a "Keep the Beat" mini-game which will have the player track the rhythm and the "Make Your Move" mini-game which will have players compete making up routines on the fly. Also new to Dance Central 3 is the Beginner mode, a difficulty mode for people completely new to dancing games, and Party Mode, where random songs and minigames are played and as people play, they are progressively moved up or down a difficulty depending on how well they are performing.

Well here we are with the next iteration of the Dance Central series. Essentally the gameplay is much the same as the first two, you stand in front of the Kinect controller and let you body guide your avatar through the various dance moves as required in the game.

So you might be thinking to yourselve about now, what makes this any different from the first two that I will want to spend my money on it? Well for starters there are the 46 songs from some of the hottest artists from the 1970's until today, artists like the 'Village People' with YMCA (come on you all have tried to do the moves at least once), 'The New Kids on the Block' with You Got It (The Right Stuff), 'Vanilla Ice' with Ice Ice Baby and 'Katy Perry' with Fireworks. Apart from this is the new mode called Crew Throwdown where two crews (or teams) of up to four characters go head to head in mini dance games.

Now the plot to this game is pretty simple, you get invited to join the DCI or Dance Central Intelligence, you the have to learn various dance crazes from the past from the 70's through until today so that you can use them against the villian Dr Tan, for each era you meet up with a different crew who help teach you the appropriate dance craze for that era. For instance for the 70's you have to learn how to do the Hustle. AS you go through the game you learn the various dance crazes and then finally you go up against Dr Tan and you win the game by defeating him.

Also new to this game is the Beginner mode for those of us out there you aren't quite as co-ordinated as most of the other people out there.

All up a nice game, and one hell of a workout as well.