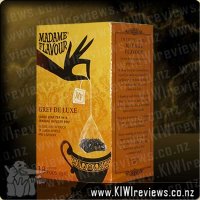 Disclosure StatementFULL DISCLOSURE: A number of units of this product have, at some time, been supplied to KIWIreviews by the company for the purposes of unbiased, independent reviews. No fee was accepted by KIWIreviews or the reviewers themselves - these are genuine, unpaid consumer reviews.
Available:
At selected Countdowns

Grey de Luxe is my interpretation of Earl Grey; true to the original, with special touches to make it a little more Madame Flavour.

Each silky pod is filled with smooth Ceylon and malty Assam leaf tea, a pinch of lemon myrtle for it's sumptuous citrus; and a sprinking of lavender flowers, whose scent is familair and timeless, just like this luxurious blend.

First off I have to say, with earl grey tea most people usually like it, or hate it. It's like a lot of food and drink products out there and this one is no different. No I am up for trying anything and while it's not really my cup of tea (excuse the pun) I have had a couple of cups of this to form my opinion on it.

The packaging is great the the colour of it will make it instantly recognisable as a earl grey type tea to all the tea drinkers out there. It has 18 infuser pods inside which lets you make a perfect brew. And lets you watch everything unfurl in the hot water.

Taste wise, this is easily noticeable as a type of earl grey with the distinct taste and smell. If you love this type of tea I am sure you will no doubt like this, it has no bad after taste and does taste quite smooth. It is a nice blend and honestly only really comes down to personal taste.

With some of the other flavours in the range they say you can use the infuser pod up to 3 times, this one doesn't have that on the packaging so I guess this isn't as cost effective as some others in the range.

I love Earl Gray tea, and I thought this one was a pretty close comparison to the more popular brand name versions. I have tried many different brands of the Earl Gray, and I have one particular brand that I now currently prefer, however this one does give it a bit of a run for it's money.

Whilst the box says it has citrus and lavender flowers I couldn't really smell it at all in the pod, but then I have been suffering from hayfever lately and my sense of smell has gone to pot. This is a very smooth tea with a very subtle taste and good aroma.

I initially tried this with milk added but decided that this just made it too weak and wishy/washy so the next time (with the same pod) I just had it black with a touch of sugar and a dash of cold water to allow me to drink it quicker (I'm not a huge fan of steaming hot cups of tea that turn around and scorch the insides of your mouth each time you have a sip). The black tea with sugar was the perfect mix and that's the way I will be having this flavour in the future.

I wasn't too sure about this as I have never been into this flavour of drink, but as it was for a review I managed to push myself into boiling the jug and having a drink of tea. As with the others in this range, I really do like the cover and this particular cover would have to be my second favourite out of the six that I have seen. The infuser pods are great, and I really do enjoy watching all the leaves unfurl.

When it came to the flavour I didn't like this at all. I found it too dreary and bitter for my tastes and to it me it seemed to leave an unpleasant after taste in my mouth. The second tea that I had I tried to add a dash of milk but this did not improve upon the overall taste of the tea. My 3rd cup I added sugar to which made it bearable but still not a drink that I would make for myself under normal circumstances.

I liked the colour of this box as I do associate this colour with Earl Grey and I liked that this lists that the tea is 60% organic. As with all of Madame Flavour's Teas I am assured on the packaging that the people that make this tea work in decent conditions so you can be assured that your nice cup of tea is hopefully not at the expense of a decent wage for its producers.

The packaging tells Madame Flavour's experience of this particular tea with a little story. The stories on all her teas packaging really personalise the tea and, like Madame Flavour, I also have always sought out a cup of Earl Grey for a little bit of home comfort when travelling. So much so that I often take a little stash of bags with me. I am definitely then an Earl Grey girl, though I usually opt for a decaf, so I had great expectations for this tea. I was a little disappointed in my first cup so have been drinking this everyday for a week now to see if my opinion changed. It hasn't markedly though I do like this more now than I did my first cup and do find my enjoyment grows as I drink the cup. This is more expensive than my usual brand so would have had to wow me for me to change brands.

I initially tried this without milk but found it a little bitter and not a pleasant taste. I have since been drinking with milk and sometimes with sugar as well. The lemon myrtle is the overpowering smell/taste for me in this tea. I do still find it a little bitter for my liking and not as pleasant as my usual Early Grey brand. The tea is full tasting so has plenty of flavour and is strong which is great (I don't like weak drinks). The taste is an acquired one for me, however I probably won't purchase this and will stick with my usual brand as a result.

Having tried another flavour the other day, I was more prepared for the "infuser pod", also known as a fancy biodegradable tea bag. The extra roomy pod seems to be designed to allow a lot of room for the hot water to move the dry tea components around while still keeping them contained for easy removal. It's a tight mesh too, which meant that I didn't have floating debris in my drink. That is something I had to endure enough in my youth.

This tea was really quite pleasant. I could definitely pick up on the lemon in the smell, but what really surprised me was how well it came out in the taste too. Full bodied and refreshing, it was a wonderful drink to just sit and sip the afternoon away while I caught up on my recorded TV shows.

The next morning this also proved to be a good wake-up drink too. While the mokopuna swear by these fancy energy drinks with names that either seem to be designed to shock or confuse, I have always preferred a nice cup of tea with it's more natural approach to waking you up. There's just something that suits me more about a civilised cup of tea than guzzling down a can of something with a name taken from one of the darker chapters of the Holy Bible.

Because I like my tea quite weak, I was able to get four quite drinkable cups out of a single pod, making it excellent value for money. A very important factor to keep in mind when you are on a tight budget like me. My only comment on the negative side would be that there was a slightly bitter aftertaste. I wouldn't go as far as to say it was unpleasant, but the last sip wasn't as pleasant as it could have been, even with a little sugar added. I might try it with some Manuka honey next time.

I tried to get friends to try this on the weekend but they are not fans of Earl Grey tea, so they refused. Last night, however, we had a visit from other friends who were happy to be experimented on. I quickly googled the "right way" to serve this tea and we got down to it.

A traditional Earl Grey is served, weak, black with lemon to taste. My husband made a cup for his mate and we waited for the verdict. "Mmm, nice", he said, offering it to his girlfriend to try. She told us she doesn't drink hot drinks but proceeded to try it. She immediately recognised that there was lavender in the tea, saying it felt relaxing to drink. She enjoyed the tea so much, our mate couldn't retrieve his cup.

So we made more cups of the tea. I tried it and found it very lemony with a very bitter finish. It wasn't my favourite. Later on, I tried it with milk and preferred it that way. The citrus flavours were still there, just creamier which was more pleasant to me.

Overall, its not a flavour I would rush out to buy. But as it turns out, it is a flavour my friend will be rushing out to buy so I still consider it a winner if you are a fan of this style of tea.