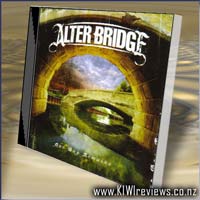 Disclosure StatementFULL DISCLOSURE: A number of units of this product have, at some time, been supplied to KIWIreviews by the company for the purposes of unbiased, independent reviews. No fee was accepted by KIWIreviews or the reviewers themselves - these are genuine, unpaid consumer reviews.
Available:
at music stores now.

The evolution of Mark Tremonti, Scott Phillips and Brian Marshall as artists is marked with the debut of Alter Bridge. After selling 30 million albums worldwide, Creed has called it quits and its members have chosen to pursue new creative directions. Over three albums, Creed achieved countless industry accolades, had two # 1 albums, and played to millions of fans around the world. Guitarist/ songwriter Mark Tremonti states, "After all Creed achieved professionally, I felt that I needed to refocus on the goals that I had personally. One of those goals was to get back to my rock and roll roots. After Creed took a break, band-mate Scott Phillips and I started to jam together again and realized that we both shared the same vision and were surprisingly anxious to get back out there and start doing it again." The evolution continued when original Creed bassist Brian Marshall, who was not part of Creed's Weathered album and had been working as a musician/ producer at his home studio, got a call from Tremonti. "When I got the call from Mark I could tell by the tone of his voice that Alter Bridge was something that he was really excited about and I immediately knew that I wanted to be a part of it. He told me, 'Your bass playing matches the sound more than any other, you're the guy'. It's great to be working with those guys again, we haven't skipped a beat," Marshall notes.

In addition to Tremonti, Phillips and Marshall is Myles Kennedy. Myles, formerly of the Mayfield Four, was recruited to be the band's singer. Tremonti's search for a vocalist had begun in late 2003. "We didn't have a timetable and we were prepared to take as much time as needed to search the world for the best available rock and roll vocalist when we remembered Myles from the Mayfield Four who had opened for Creed in 1998," Tremonti recalls. "We called him and asked him to lay down vocals on a couple of tracks we were working on. None of us could recall hearing someone with his voice or passion - as soon as we heard what he did we knew he was the guy. Then he came down to rehearse with us in Orlando and he was one of the nicest and most humble people we had ever met; everything just clicked with all four of us. As we were running through the songs, the future fell into place before our eyes."

The shared vision of the band seemed to coincide with a concept from Tremonti's youth, and the name 'Alter Bridge' was born. The name comes from a long-standing bridge near Tremonti's childhood home in Detroit, which was often regarded as a boundary to the children in surrounding neighborhoods; beyond it was uncharted territory. The small bridge epitomized "choice" and "the unknown" for Tremonti.

I've had this CD for a while now, but recently started listening to it a lot more, as well as focusing more on the lyrics, instead of just the "sound" of the music, like I normally do. I've always loved CREED, which is what drew me to AlterBridge... with reasonably high expectations. Although it's been up on the shelf for a while, that's simply because I've been in the mood for other types of music (I have an EXTREMELY wide taste in music... pretty much enjoy anything and EVERYthing except for opera), until recently. Once I listened to the CD again, I found myself hooked, and it's now played quite regularly, more so than even CREED.
It has that dark quality I rather enjoy, yet not so heavy that you get overwhelmed with the sound and find it difficult to understand the lyrics.
Good for background music, or for focusing on while I'm writing my poetry. Definitely hoping they hurry up and get on with putting out a new album!!

I always liked CREED, but it was more the music that appealed most... the lyrics just had a bit too much overt religion in them, something I find puts me off. Don't get me wrong, I have nothing against Christian music itself, but I resent evangelists, and putting the 'all praise' on mainstream airplay is a little too close to having the bible rammed in my ears for my liking.

So when I heard Creed had split, I had to wonder if there was more than just the official story behind the split. Seems there just might have been.

With the musical engine of Creed intact, and a new vocal talent added in, Alter Bridge has been born as a power amongst the Rock bands. With experience, talent, passion and power behind them, Alter Bridge strikes me as possibly The Next Big Band to Watch.

With the music still as compelling as it ever was, but with less of the distractions enforced by preaching lyrics, I have found them to be some seriously good listening, with a more mature sound.

Overall, still not the sort of music that blows me away, but it's in the 'regularly listened to' playlist for sure. Can't wait to see what the next album has to offer. Maybe something a little harder would go well, just to push some of the emotion that lurks just out of reach in some of the tracks.

Score: 8.8
Product reviews for listing 94: Soundtrack: Queen of the Damned -  Performed by various