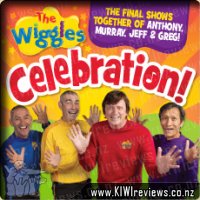 On May 18, Anthony, Murray, Greg and Jeff - The Wiggles - announced that 2012 would be their final year of touring together and unveiled plans for their final world tour together.

Having played in arenas and theatres around the world, The Wiggles are finally coming back to New Zealand to entertain their many Wiggly friends.

The Wiggles will embark on the Celebration Tour of the New Zealand in September with a hits loaded spectacular giving their Wiggly fans a chance to say farewell to Anthony, Murray, Greg and Jeff in their final shows together.

Now in their 21st year performing to children around the globe they are bringing their big hits such as Hot Potato, Getting Strong, Rock A Bye Your Bear and Toot Toot Chugga Chugga and more in a show jam packed with audience favourites!

At the end of 2012 Jeff, Murray and Greg will then hand over the purple, red and yellow skivvies to a new generation of performers to instead take on backstage creative roles. Anthony will continue on stage as the Blue Wiggle alongside Emma Watkins, Lachlan Gillespie, and Simon Pryce, who have been hand-picked by the group to become the Yellow, Purple, and Red Wiggles.

Join Jeff, Anthony, Murray and Greg as well as our Wiggly friends; Dorothy the Dinosaur, Captain Feathersword, Wags the Dog, Henry the Octopus and the world famous Wiggly dancers for this spectacular production of the Celebration tour

The Following:  The Third and Final Season
Rating: 7.8

Well since I was little when they first come out I loved them, along with my cousins and sister we would always watch it while at nana's on school holidays. We knew all the words and dance moves.

So of course once I had kids they had to love the wiggles like I do, I got all the videos from my nana's place and put them on for the kids to watch and yup they loved it too.

So once I heard the wiggles were going to be in NZ we got tickets, 3 adults and 2 kids. We headed to the arena and had lunch there ringing beforehand for Gluten Free meal for my daughter and they did a great job.

After lunch we went and found our seats ready for our 1pm show we sat and waiting they were late by 30mins lucky the kids didnt get too restless. Once it started it was all go, the show was great, the guys just cause they are older now doesnt mean they cant perform well cause they did a great job.

They would chat to each other and it was good, kept the adults happy and laughing while the kids enjoyed the songs (I wont lie we danced and sang too). What was great is they introduced the new wiggles that were replacing the ones leaving, it was nice to see who was going to do the shows.

One thing that did tick me off was the price of the items, $20 for a balloon I felt bad telling my kids not, but after paying for tickets another $40 onto just for 2 balloons was just stupid, after seeing that price I was scared to see the prices of tee shirts etc.

Overall it was a great afternoon, the kids had fun, the adults enjoyed themselves, I would love to go again, but since it was their last tour that wont happen. I would however go to the new wiggles concert if the kids are young enough and haven't lost interest in them.

The wiggles were coming to town and for a toddler, it was like Christmas! My son (4 years old) wanted so much to attend as all his friends at daycare were going, i got him tickets for his birthday ... so he had to wait a bit longer to know he was going that the others!! We live in Dunedin but ended up going to the Invercargill show.

Tickets were $35.00 each so with a booking fee it was just over $70.00 for him and I to go...getting up there in price for something i really wasn't that interested in!

When we arrived it was merchandise madness ... My son wanted a Dorothy balloon and it alone was $20.00. We had our own food and drink so didn't need to purchase anything else.

The show started just after 2pm and it went off with a bang! The original wiggles burst out in their big red car and almost immediately the Wiggles made little jokes between themselves - i really loved this aspect as it gave the show more depth for the adults (there was nothing 'adult' to the jokes - just the fact they were talking and agreeing amongst themselves on stage)

Now these guys are not really *young* but my golly they have awesome stage presence and energy! They jumped and bounded over the stage - including doing the splits!!

The wiggles introduced us to their replacements as all apart from the blue one are leaving - not sure how i like the idea of a female wiggle - (being a female myself thats not sexist - i hope!!) but time will tell. The new ones certainly did a great job!!

Overall this was a fantastic show - blew me away and i really enjoyed it! It was quiet short - just over an hour but i think that was long enough for the kids! Would be nice if kids tickets were a bit cheaper, but with the popularity of the wiggles they are bound to sell tickets almost regardless of the price!!

Prior to becoming a parent, the Wiggles were the one children's entertainment group I could handle listening to. I had friends with kids so I was exposed to all sorts. When my first daughter came along, I cultivated a love of the Wiggles through the DVDs.

I have been to two Wiggles concerts previously, as well as a Dorothy only show. Tickets for this one were dearer than the other concerts at $35 for normal or $40 for hot potato (VIP) seating. I didn't mind paying it though to say goodbye to Jeff and Murray who I will especially miss.

The merchandise was pretty pricey as always. A teeshirt was $25, a balloon was $20. My daughter wanted a balloon but I managed not to buy anything. We already had all the tour teeshirts, headbands etc. We got hot potato seats, so third row right in front.

I found the sound and lighting really harsh. I know my baby was bothered, as was my 5 year old. The child next to us had her hands over her ears the whole time.

The performance itself was excellent. The guys do a great show, so full of energy and excitement. Its great to see the banter and friendship between them all. Especially as they rib Jeff about his hair. We got to see the new Wiggles and they are all old hands really. I'm so glad they were included to help transition the kids.

A Doll's House traces the awakening of Nora Helmer from her unexamined life of domestic comfort. Dominated her whole life by either her father or husband, Nora must question the foundation of everything she believes in when her marriage is put to the test.

Henrik Ibsen is considered the father of modern drama and one of the world's most influential playwrights. Written in 1879, A Doll's House, is as powerful today as ... more...