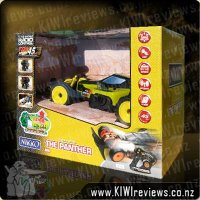 Full function buggy, ready to run. Available in one of six different frequency band chips, to allow for up to 6-player racing.

I was lucky enough to get this and another Nikko rc car to review, and of the two models I was expecting this one to be the big wow-factor. Instead I found it to be quite a bit less impressive on the whole than the other car. Some areas did impress me though. The design of the body and the plastic it is made from were great, more so after a couple of very nasty crashes into misjudged curbs and one wheel of a parked car. The bumper design kept the rest of the car well protected from cracking on impact and the bumper itself suffered no real harm either. A few scuffs and one small shaving were all it had to show for its battle with the hazards.
So, why was this one a bit of a let down? Speed. Or lack of it. A mate of mine is a cop and he can get access to a portable speed gun. With his help we ran this baby at full speed in a line straight at us, and directly away from us. Six times in each direction and then we averaged the speeds even though they were all pretty much the same. The top speed we could get, in a flat and smooth asphalt parking lot 200m wide, was nowhere near the 45kph promised. The average speed was still pretty zippy at 31.4kph and the fastest run was 32.1kph, but if someone is buying this it will be for that grunty 45kph promised on the box. Not going to happen. At least, not before you have to turn around or run out of signal. Maybe if we had turned off the (very cool) headlights we could have given it some more goose but I really doubt that.
It handled well, even at speed. A turning circle about 8m was the best we could manage at full throttle, but I wouldnt want to bet on that as a guarantee (it could be a lot smaller) because where we did those tests turned out to have quite a bit of sand and loose stones on the ground from the garden next to it. We didn't see that until after we had packed everything up and were heading out and had to go past that place. Range was a little shorter than I could have hoped for. With control dropping off to pretty much nothing around the 75m point it's not too bad for unaided vision, and maybe its a bit silly of me but I would have hoped for a range about double that, to give the real speed-heads a bit of room to move and maybe pick up a bit more speed.
For what you are getting the price is better than fair, its a well designed toy that is very durable and sturdy enough to take some real hammering, but its biggest let down was the lack of a practical top speed even close to that promised. As a slight saving grace, I loaned this to my cop mate and he had a go with it the next day on his new driveway which is very smooth-poured concrete. He told me with great delight that this "beautiful little bugga" as he called it, was a natural when it came to drifting! He said that without any trouble at all he had it "moving diagonally around in circles on the pad in front of his garage and with just a twitch it would shoot off in any direction I wanted it to. Scared that annoying cat from next door who suns itself on my drive right good and proper! Didnt see that fuzzy pr**k again all day!"
Worth getting? Sure! You will enjoy it heaps, the kids will be in heaven, and you will play with it until the battery is dead without realising the time. But if you want something with serious speed you may want to move up the scale a bit more. Maybe I just got a dud one, the box had been opened and repacked before it got to me so I dont know, but if this was the same as a brand new one, it didnt live up to its own hype.

Wicked Fast Racing
Command Darkside from your smartphone or tablet at speeds of up to 14mph. Darkside's durable shell means you don't have to worry about crashing and built-in LED's with customizable settings let you drive at night.

Diabolical Tricks
The Darkside app is built to ... more...