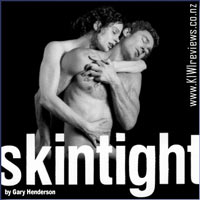 Disclosure StatementFULL DISCLOSURE: A number of units of this product have, at some time, been supplied to KIWIreviews by the company for the purposes of unbiased, independent reviews. No fee was accepted by KIWIreviews or the reviewers themselves - these are genuine, unpaid consumer reviews.
Available:
Aug 20th - Sept 19th

Based on Denis Glover's poem, The Magpies, Skin Tight tells the story of the enduring love and life of Tom and Elizabeth on a South Island farm.

A superb piece of physical theatre, Skin Tight has won high praise in New Zealand and the United Kingdom. Performed by Danielle Cormack and Jed Brophy.

Trying to find parking less than 10 minutes before the show starts is never a good idea. Arriving late to a show is also not a good move. Especially when the show is less than an hour long.

Because of that, we missed the start of the show. None the less, the script was such that by the end of the play we understood enough of the story to appreciate the power of it.

The sheer passion of the actors told of the intensity of the characters lives, as they recounted their years together. The characters, Tom and Elizabeth, were well into their later years, yet they always saw each other as the young adults they were when they first met. The disparity was wonderfully telling of just how we can see ourselves when we stay young in our hearts.

The show told the power of their lives together, with a bittersweet ending, wonderfully illustrated by the cameo appearance of the older Tom, showing not only how he saw himself, but how the world saw him as well. This stark contrast brought the show to a climax.

Overall, not entirely sure how I felt about this one. The rapid changes in tempo and feel, the fact that I missed the opening, the feeling that even if I hadn't, the play would still have been a little lacking in something... all added up to a case of "So what was the big fuss?" But on the other hand the manner of presntation was quite capturing, making a clear indication impossible. This one is a real 'Personal Taste' show.

Adapted from the novel by Maurice Gee, this much loved eight part TVNZ series that first screened in the early 1980's has finally become available to its many loyal and ardent fans.

Beneath the extinct volcanoes that surround Auckland, giant slug like creatures from another galaxy are waking from a spellbound sleep that has lasted thousands of years. When they are released they start to devour the earth, turning the planet into ... more...