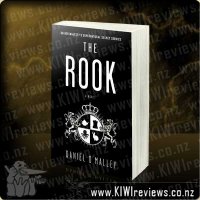 "The body you are wearing used to be mine." So begins the letter Myfanwy Thomas is holding when she awakes in a London park surrounded by bodies all wearing latex gloves. With no recollection of who she is, Myfanwy must follow the instructions in a series of letters her former self left behind to discover her identity and track down the agents who want to destroy her.

She soon learns that she is a Rook, a high-ranking member of an secret organisation called the Chequy that battles the many supernatural forces at work in Britain (who knew?). She also discovers that she possesses a rare, potentially deadly supernatural ability of her own.

In her quest to uncover which member of the Chequy betrayed her and why, Myfanwy encounters such wacky folk as a person with four bodies, an aristocratic woman who can enter her dreams, a secret training facility where children with bizarre traits are transformed into Chequy operatives, and a conspiracy more vast than she ever could have imagined.

Having fallen big time for the world as revealed in "61 Nails" I was quite prepared to fall all over again for this tale... and I did. Bigger time.

Take James Bond and give him some super genetic 'Q' toy, and you have some idea of what an operative in this agency is like. For some reason not clearly explained in the book, the operatives are ranked according to chess pieces - Pawns are the foot soldiers, Bishops handle international affairs, Rooks handle domestic affairs, Knights aren't really featured in this much, and the King and Queen are named the Lord and Lady - for reasons that ARE clearly explained in the book, and are quite obvious considering this agency operates within a Monarchy.

Though the pre-release paperwork and some of the promotional multimedia offer a somewhat humorous bent, I personally didn't find much to laugh about. This tale was gripping, thrilling and very much in line with The Bourne Identity - secret agent with no memory of who they are, has to fight their way through the world to right the big wrong and try to stay alive long enough to find a way to stay alive long-term. With all the agents and operative 'powered' in some way with a supernatural skill, ability or just quirk of genetics, the story is never short of "Whoa!" moments that drive the plot along another stage.

Some readers will undoubtedly find parts of the plot pretty silly, but if you take into account the protagonist awoke in a park, in the rain, surrounded by dead bodies all wearing suits and latex gloves, and is trying to make sense of a world in which she understands where she is, when she is, but nothing at all about WHO she is, despite the fact the previous 'her' seemed to know exactly what was going to happen but was powerless to avoid it... then the funny bits stop being quite so funny really. I can only imagine how bad it would be for a regular person waking from a coma with amnesia, let alone how much more complicated it becomes when you start to factor in the supernatural aspect of this world and the whole "my day-job as a super spy" scenario.

Overall, there's plenty of scope to take this world further - no end of strange and supernatural skullduggery possible to drive future stories, and I certainly hope Daniel does explore this world more. As a debut novel, it's a big bang on the literary scene, and if more comes from it, I certainly plan to add my eyeballs to the tally of those glued to the pages. Well worth it for spy-story fans who are getting a bit jaded, fantasy readers who want a bit more grit and a few less fairies, and for sci-fi readers wanting to step sideways for a bit without having romance and soppy stuff messing it up.

Your simple guide to the computer by the author of Quick & Easy PC and the popular 'On-Line' column in the NZ Woman's Weekly.

Quick & Easy PC 2 is a systematic look at most of the key features and options in Microsoft Windows, Internet Explorer and Outlook Express. It is designed to extend the skills gained by readers of Quick & Easy PC. This book provides easy-to-understand information to help you ... more...