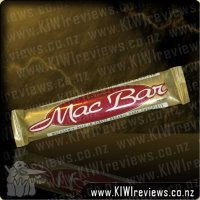 Disclosure StatementFULL DISCLOSURE: A number of units of this product have, at some time, been supplied to KIWIreviews by the company for the purposes of unbiased, independent reviews. No fee was accepted by KIWIreviews or the reviewers themselves - these are genuine, unpaid consumer reviews.
Available:
via the company website, at selected quality retailers and Farmers Markets

I'm not a big dark chocolate fan, I find them too rich and they leave a bitter after taste. In fairness though I did try a small part of the Mac Bar.
I still don't like dark chocolate :) so I was more than willing to share this with my husband who does like the darker variety. What I did notice was the lovely texture, very smooth but this wasn't enough for me. The cocoa was very strong.
Price wise, I would pay up to $2 for my husband but nothing over that.
The packaging is very appealing, plain and simple and eye catching :)

After receiving these and putting them in the fridge while I tried to think of interesting ways to use them, I got distracted by family matters and forgot all about them until my little helper spotted them while hunting through the fridge on a recent visit. Funny thing was, I discovered about 5 hours later that about the same time he found them, I got an email asking if they had gone missing in the post, or would I be posting my reviews soon. Oops.

This was the second bar I tried, mainly because the young mokopuna who had volunteered to help his old Koro test them decided he wanted to go for the other end of the range after we tried the milk. He thought it would be even sweeter not knowing that dark chocolate has less sugar and more cocoa. Still he found it was pretty good though not his favourite. But me, I liked it a lot, always a fan of dark chocolate.

This bar had a nice sharpness to it that would have gone really well with a hot coffee or a tiramisu dessert. Just enough sweetness to cancel the bitterness of the coffee, but not enough to take away that richness. The macadamia nuts in it just added a really nice sideline to the flavour, giving it some depth and stopping it from being JUST an amazing chocolate. Whether this one or the milk would be my favourite, well I still can't say. I think I will need to buy some more of these and do some more testing and thinking. But this time, I will do it when I am home alone!

Over the last month or so, my life has been a bit crazy, with little time to chill out and try something new. So, it was with great anticipation I shoved the remaining two Mac Bars into my bag for a day at Fieldays. I figured I was in for a lot of walking, so taking along some high-energy snacks would be a smart move. Seems I was right, because I had no trouble walking a total of around 24km over the first day!

Having some idea of what to expect after trying the Mixed Choc bar, I was still unprepared for how rich the full-dark was. To be bluntly honest, it was a tiny tad too rich for my tastes, and I have to say I found the mixed bar to be a bit more appealing. I can't say I DIDN'T like this one, only that I found it slightly less appealing than the mixed, mainly because with this bar, I had a strange undertaste of bourbon of all things!

Overall, this is a lovely treat, and would go well as part of a gift pack or a special event table display, but as an everyday snack the price alone puts it off the list for me. Those with a lot more free cash would be smart to consider this over any other choccy bar around, for the health benefits alone, if not the ethical right'ness of organic, hand-made, NZ produce.

WOW its not often you come across a dark chocolate that you can honestly say does not leave a gritty feel in your mouth, nor is it far too rich or bitter to actually consume with a smile on your face....But Mac Snack as done just that with this bar.

Mac Snack Dark believe it or not has 70% cocoa solids, but no sign of that horrid palm oil that has become a firm favorite for some other chocolate producers

This dark chocolate is really very nice. Smooth, velvety and a rich dark colour. It even smells great the second the packet is opened. It really is a fantastic dark chocolate. Not everyone is a fan of dark chocs, so this would be a great one for those who would like to eat it more but find other dark chocolates to bitter, strong or gritty. Mac Snack have created a fantastic combination with this one. Its full of macadamia and chocolatey goodness, rich tasting yet not over bearing.

Like the other bars in the range, the price starts around $1.75 per bar going up to around $4.00 depending on where purchased. I think for the size, that $4.00 is asking a little to much, but at the lower end of the pricing scale $1.75 to $2.00 is definitely a fair price to pay for this great little chocolate bar.

I'm not a huge fan of dark chocolate to begin with, so gave the bulk of the bar to my husband to get his thoughts on it. I myself, had just a small piece. When compared to other brands dark chocolate this one tastes stronger, and also much richer, so for my friends who enjoy dark chocolate I would add this in a gift basket for them.
My husband said that he rather enjoyed it, and that the nuts gave it a great, added taste and overall improved the taste and texture of the bar.
While it's not something that will end up in my trolley, I would recommend it to my chocolate-loving friends. The price, would make it a decent treat every now and then when added to a gift basket.

This bar is pure luxury. The organic chocolate contains 70% cocoa solids. There is not a drop of palm oil or any of the other rubbish that is in cheaper chocolate. You definitely get what your pay for: A top quality chocolate. It is also New Zealand made with locally grown macadamias.

I savoured every bite of it and let out an audible moan when my three year old daughter walked in on me eating this delicious treat. I was very generous and allowed her a bite. I expected her to spit it out as dark chocolate is more for an adult's palate. Instead she immediately returned for another bite. We were both disappointed when the bar was gone. We both needed more to be satisfied. A 30g bar is really a selfish treat. It is not big enough to share with anyone.

It didn't taste too bitter like most dark chocolate. It was divine. The macadamias have a natural sweetness that helps to balance out the bitterness of the chocolate.

One sublime step beyond Lemon Curd.