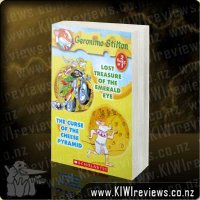 Who is Geronimo Stilton?
That's me! I run a newspaper, but my true passion is writing tales of adventure. Here in New Mouse City, the capital of Mouse Island, my books are all bestsellers! My stories are full of fun, tastier than Swiss cheese and tangier than Extra-sharp cheddar. They are whisker-licking-good stories, and that's a promise!

2 books from the Geronimo Stilton series come together in this 2-books-in-1 volume.

Lost Treasure of the Emerald Eye
It all started when my sister, Thea, discovered an old, mysterious map. It showed a secret treasure hidden on a far-away island. IN no time at all, my sister dragged me and my cousin Trap into her treasure hunt. It was an adventure I'd never forget...

The Curse of the Cheese Pyramid
It was a dream come true - I was off to Egypt to interview a famous archaeologist! I climbed onboard a crabby old camel that would take me across the desert to the Cheese Pyramid. There, among mummies and hieroglyphs, I would learn the secret of the Secen Wonders of the Ancient Mouse World...

I wasn't as taken with this book as with other Geronimo Stilton stories. I wonder if in the quest to produce lots of books, and in the long run make lots of money, the "Geronimo Stilton" empire is now just following a set formula of lots of crazy and colourful fonts and mouse and cheese infused words? Just wondering...

But anyway like all the other books these two stories follow a predictable path of having a bit of a crazy mouse adventure and including the very predictably large family of Geronimo Stilton.

I might need to double check but I am sure that some of the earlier books had lots of interesting information in them (which I thought was great) whereas these two stories are just straight stories, though most pages do have colourful illustrations.

In the first story Geronimo, Thea, Benjamin and Trap embark on a boat trip to find the "Lost Treasure of the Emerald Eye" . They have a pretty rough and stormy adventure before finally discovering that the treasure wasn't quite what they thought it was....

In the second story Geronimo heads to Egypt after his Grandfather William Shortpaws (Cheap Mouse Willy) sells everything in the office and fires all the staff of The Rodents Gazette! His Grandfather ensures that Geronimo has a trip he will never forget but in the process Geronimo and his new found friends figure out a way to get Grandfather out of the picture ...for a year anyway... I actually found this story just a bit ridiculous and struggled to make myself finish it!!! But then I am not the target reading age.... It did however have a bit of information about Egypt so you do learn a few basic Egyptian facts! Enough for me not to write off the book completely

So overall I guess if you want the standard Geronimo Stilton books then this will hit the mark nicely but if you are getting a bit over the "formula" this might not be one to read and have a quick dip into the stories of Thea and the Thea Sisters.

As a kid, I love adventure, and I found that this book was bursting with it! The cover looks awesome, the pictures really gave out a sample of each story's theme. One of the best things I love about this book is that it's a 2-in-1, so as soon as I finish the first story, I don't have to wait for another book to come out for review, I just have to turn the page! I wish that the name of the REAL author was put on the book, that way I wouldn't have to tell people that the person who wrote this book was really a character.

LOST TREASURE OF THE EMERALD EYE:
This has got to be the best one out of the two, it actually made me think of Indiana Jones when I read it, it's full of adventure, puzzles and riddles, with a cheesy end to the tale! I have no problems with this story, it was all in my league, and it actually wasn't too childish either. This story really is a good way of bringing together mice and human life, it has a large amount of human perspective with a hint of rat life in it. I have no favourite character in this story, all the characters are ones that I love.

THE CURSE OF THE CHEESE PYRAMID:
This one is not as good as the first story, it was a bit on the short side, and there are some parts that made me a bit grossed out, so it's not one that I would read during meal times, that much is for certain. The story did begin with a cool beginning, and was okay for most of the middle parts, but it ended rather weakly unfortunately. The Egyptian parts of the story were good, it seemed that everything involved cheese: cheese pyramids, cheese obelisks, and maybe even the food offerings to their gods were nothing but cheese sandwiches, but I suppose that you can't combine human life and mouse life without throwing some cheese in the tale.

All things considered, this is a book I could live with reading a few more times. The price is excellent, it's less than double the price of two separate books, and unless you're like Mr. Crabs and want to gather all the money you can and only spend a few dollars a day, or if you are on a tight budget, this book isn't a wallet's idea of a black hole. It is suitable for kids 6-12 years old, and it's perfect for night-time stories as well. Happy reading!

The extraordinary role of viruses in evolution and how this is revolutionising biology and medicine. Darwin's theory of evolution is still the greatest breakthrough in biological science. His explanation of the role of natural selection in driving the evolution of life on earth depended on steady variation of living things over time - but he was unable to explain how this variation occurred. In the 150 years since publication of the Origin of ... more...