The Art of The Hobbit review 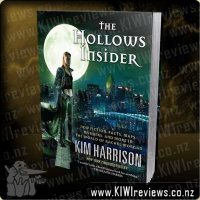 One misfired spell is all it took to send investigative reporter Devin Crossman on a mission to uncover all the secrets of bounty-hunting witch Rachel Morgan, and expose them to the world.

Herewith are all of Devin's notebook entries - a treasure trove of evidence including maps, species profiles, magic spells, documents from Inderland Security, Takata's song lyrics, Betty Bob's recipes, ley line charms, entries from the Were Registry, articles from the Hollow's Gazette, Rynn Cormel's Vampire Dating Guide, demonic spells, and many more entries that cast light into regions of the Hollows that have never been revealed.

But Crossman's one-man war against Rachel Morgan has not gone unnoticed...

Having absolutely adored the story series, this was a very welcome addition to the library. When you find a series set in a universe you can really 'get into' a compendium or handbook that gives you all the back-story can really help you set the scene in your head. If only more authors would do them BEFORE the series - tough and near-impossible, I know... but we can wish, can't we?

In this case, it was brilliant, though a little tedious in some places - official paperwork always leaves me cold, even when I am not the poor sod filling it out. However, this book redeemed itself in aces with some wonderful recipes (though I would have loved it if they put in a suitable replacement for the fictional 'drug' Brimstone, asd the cookie recipe sounds divine!) and some wonderfully colourful extras, such as pages from the Christmas Edition of the Hollows Gazette featuring submissions from Tinks, and anonymous rewrite of "The Night Before Christmas" by Racehl, and some hilarious 'news' articles that fit well with the books set during that period.

Overall, wonderful! Since there isn't exactly a storyline - though the thread of Devin does imply time passing and a high level of continuity - I won't say it's a great story... but I will say it's a brilliant addition to the overall story that is the Rachel Morgan serties. But the real winner and icing-on-the-cake for me was discovering that the dust-jacket artwork is printed including glow-in-the-dark ink that 'lights up' the night scene printed on it. Brilliant... and since it isn't explicitly mentioned on the book itself, I wuld almost call it a 'physical easter-egg'. Kudos to the designers!

Harry has been burdened with a dark, dangerous and seemingly impossible task: that of locating and destroying Voldemort's remaining Horcuxes. Never has Harry felt so alone, or faced a future so full of shadows. But Harry must somehow find within himself the strength to complete the task he has been given. He must leave the warmth, safety and companionship of The Burrow and follow without fear or hesitation the inexorable path laid out for him... ... more...