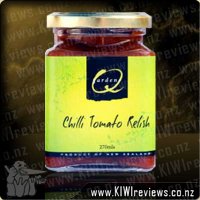 A great all-rounder, spread on pizza bases, use in sandwiches, or on cheese boards.

I've always been of the opinion that a meal without chilli is not a meal. One should have chilli added liberally to pretty much everything.

This chilli tomato relish is a great accompanyment to just about every meal but the biggest user of this product was my wife - who normally avoids anything with there slightest hint of Chilli (I do add it to her food when cooking and so far she hasn't noticed yet!).

While the amount of chilli was undetectable for me, the mild heat was at a level which lifted the flavour of the product and of the meals to which it is being added and my wife in particular loved it with beefburgers, mince and pretty much anywhere in which she would use ketchup (even mashed potato!)

This could quite easily become a regular product in our culinary lives, more for my wife than me; but that is not to say I didn't enjoy it, because I did.

I was lucky enough to be selected to review Q Gardens Chilli Tomato Relish.

I tried the relish with cheese and crackers and also in a tortilla wrap.

I love it. It has a great taste. Although it is called Chilli Tomato Relish I could hardly taste the chilli. I tasted more of the sweet tomato and vinegar.

As I am typing this I know that the fridge is only a couple of feet away and I am having to restrain myself from getting into the jar again.

I am keen to try it as a pizza base mainly to see what it will be like hot but I don't think I have enough left in the jar.

I will be buying it to give as a gift as it is a bit expensive just for myself.

I absolutely LOVED this one! Way beyond my budget as anything more than an occasional treat, it is something I would buy in advance for a special event though.

First, I tried this mixed through some Udon noodles and steamed vegetables and it was amazing. The rich flavour was such a delight and yet it still left room for the vegetables to bring their flavours into the mix too, breaking through to give a solid taste of their own.

I also thought I would go a bit low key and try it on a plain ham and cheese sandwich. Shaved ham, mild cheddar and this on wholegrain bread was pretty hard to beat as a lunchtime snack, though adding a few thick slices of beefsteak tomatoes also made for a good meal by adding bulk without adding calories.

I also found that this, just on it's own, in a bowl surrounded by carrot sticks, crackers and asparagus shoots made for a great dip at a social gathering I had to take a plate to. Everyone was very complimentary about it and thought I was a genius for making it. When I told them it was from a jar many simply did not believe me.

All in all, this is great stuff. If the price was lower, it would be a permanent in my fridge.

I was really quite impressed with this... so many uses, and so tasty, but without the tastebud-destroying, scorching heat one would assume when seeing "Chilli" in the name. Quite the opposite, this is quite mild in heat but full of flavour.

As is to be expected, this goes wonderfully dolloped on meat of your choice. I tried it on sausages, in a luncheon and cheese sandwich, and on a ham salad club sandwich. Also to be expected, it goes very well on crackers as party starters, and even fussy Mr3 gave it a "Mmmm, Yummy!" on his first sampling. Then it was time to take it into #FoodLab and experiment.

For turning plain fried mince into a zingy savoury mince, this was a no-brainer. A few heaped tablespoons of this to half a kilo of mince, a chopped onion and a couple of cups of frozen veges, add in 3 or 4 medium tomatoes well chopped, some freshly ground pepper and sea salt and finely torn fresh basil, and simmer for a bit... you have a wonderful, non-processed meal for four. Heap this on some toast (which I first spread with some yummy Cannon Hill Aioli), top with a couple of poached eggs and you have a meal fit for guests... OK, it's not fancy, but it's tasty, filling and oh so more'ish, if a little rough to the gourmet eye.

As another experiment, this was used to make a stir-fry sauce, and it was a resounding success. Mixing this with some dark soy, a dash of St Andrew's Limes 'Lime and Chilli Plash' , a couple of cloves of freshly crushed garlic and some fresh fine-grated ginger root was the ultimate indulgence. Due to the resulting spiciness, I had to experience this one alone, as no-one else in my family would tolerate the 'heat' very well, and it's a crime to waste food this good.

Overall, well worth getting for something different to have around. Dashed ontop colt-cuts of leftover roast beef or chicken, this would be an absolute winner. I plan to get more of this rolling into Winter, so I can try it in some slow-cooked beef cuts. Yum!

Includes 10packs of gummy candy in assorted shapes and flavors.