« Doctor Who - Colony in Space review 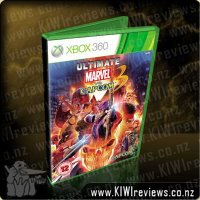 The highly acclaimed fighting game adds 12 new legends to the robust Marvel vs. Capcom 3 roster, bringing the total overall roster of characters up to 50. The first new characters revealed for Ultimate Marvel vs. Capcom 3 include much-requested Capcom character Strider who slashes his way into the fray along with Ghost 'n Goblins villain Firebrand. On the Marvel side, Ghost Rider will finally exercise his vengeance and Hawkeye will pick apart foes.

Features:
• ULTIMATE ROSTER: Twelve new legends from Marvel and Capcom join the fray, bringing the total roster of characters up to 50.
• MORE LEGENDS: Includes the first fighting game appearance of some of the most iconic and celebrated characters from the Marvel and Capcom universes, including Strider and Firebrand from the Capcom side and Ghost Rider and Hawkeye from the Marvel universe.
• NEWLY BALANCED: Ultimate Marvel vs. Capcom 3 offers re-balanced gameplay that will provide accessible depth for both newcomers and pros alike.
• ENHANCED MODES: After many fan requests, Spectator mode is now available as part of an overall improved online experience along with other new modes and enhancements.

Apart from a misspent youth where I wasted plenty of coins in the video arcade, the last time I played a fighting going was back on the original Xbox, it was called dead or alive ultimate, and while frankly I sucked at it, it was still great fun.

Now I find myself many years later trying the latest offering from Capcom called Ultimate Marvel vs. Capcom 3. Now I figured that this game would probably be a good game, and with all the current Marvel movie adaptations doing the rounds, I was excited to see how the arcade fighting versions of them stood up to their Capcom equivalents. Well I wasn't disappointed at all.

There was one thing I was suprised at, with all the power and graphical ability of the current generation of consoles, I was surprised that the graphics for the characters were as low tech as they were, then I realised that it tied in to the whole comic book feel of the game and so it fitted perfectly and if anything it helped give me a bit of nostalgia for the original arcade machines such as Street Fighter. As are suitable and expected of comic book graphics the colours are vivid and the whole punching, kicking strike effects and the special move effects live up to that standard.

The sound is top notch and the voices for each of the characters seem to fit just right, even if Iron Man isn't talking with a Robert Downey Jr voice

The game also quickly reminded me that I do suck at these types of games with my set of 3 characters getting pummelled after only a few rounds. It was also then that I realised that there is also probably a bit of strategy involved in picking your 3 team mates, however as my knowledge of these universes is rather limited I consigned myself to just sucking at it like I do all the others of this genre, however if you are a fan of these type of games and your better than me (which really isn't that hard) then rush out and buy yourself a copy of this today.

Score: 9.5
Product reviews for listing 4990: The Last of Us
Developed by Naughty Dog

The population has been decimated. The United States government has collapsed long ago. Twenty years after the outbreak, abandoned cities are slowly reclaimed by nature. Roaming bands of survivors are killing each other for food, weapons, or whatever they can get their hands on.