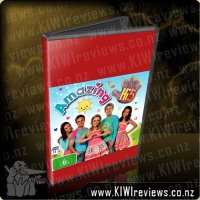 You'll discover just how amazing the world can be with your Hi-5 Friends! Amazing is a colourful, fun-filled journey that will leave you feeling warm and fuzzy as Casey, Fely, Lauren, Stevie and Tim take you to places beyond imagination! From adventures deep down under the sea to quests in outer space and everything in between your Hi-5 friends make sure you L.O.V.E., love every moment!

I really wanted to not like this DVD as I am a huge fan of the original Hi 5 cast and have watched more hours than I care to admit of Tim, Nathan, Kathleen, Kellie and Charli and, Kathleens replacement when she went off to have her own little babes, Sun.
( Kathleen de Leon Jones 1998-2006
Kellie Crawford 1998-2008
Nathan Foley 1998-2008
Charli Delaney 1998-early 2008
Tim Harding 1998-2007
Sun Park late 2006-late 2008)
Little Miss Five grew up with the original cast thanks to lots of hand me down VCRs and DVDs and when the new cast started almost en masse in 2008 we chose not to follow!

This was our first viewing of a DVD with the complete new cast (Stevie Nicholson, Casey Burgess, Tim Maddren, Lauren Brant, and Fely Irvine).

The immediate first impression of this DVD is "pretty cool" as the DVD case, which is a carry DVD case, has a wrap around cardboard box with a "press me" button. You just know its going to be good... "L.O.V.E I love you, you love me..." A singing case brilliant! It was seriously days before my girls were at all interested in actually watching the DVD and they both now can spell "love" no problems!! I would actually buy this just for a entertainment value of the case

But anyway on to the DVD. If you have never watched the original Hi 5 then I think this is a winner for the intended age group. If you have spent years watching the original cast then be prepared to maybe be a bit annoyed at the new cast attempting to imitate the mannerisms etc of the original cast. (That said though the littlies will not even notice. Mine didn't.)
This follows the typical Hi 5 format but is more animated and "modern" than the older DVDs. By that I mean that more money has gone into the props and animation etc that overlays the sequences. As always Hi 5 is entertaining and educational and just manages to capture a child's imagination. Not to mention that they always manage a few catchy songs that you just can't ever get out of your head!!

It is only my love for the original cast that stops me from giving this a 10/10 but I don't think your little ones would be disappointed to find this in their DVD selection.

The fictional city of Brookfield Heights, Michigan is left divided by the 2016 U.S. presidential election. Local restaurant owner Ally Mayfair-Richards (Sarah Paulson) is utterly distraught by Donald Trump's victory and several of her longstanding phobias, including coulrophobia, hemophobia, and trypophobia, flare up as a result.