Something Unknown is Doing We Don't Know What review 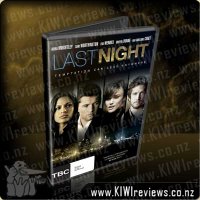 Last Night is ultimately a film about choices - the choice you make to be with someone, to give yourself physically and emotionally, and how to survive all three. Set in New York City, Last Night is the story of a married couple that while apart for one night, is confronted by temptation that may decide the fate of their marriage.

Joanna and Michael Reed are 7 years into a successful and happy relationship. They are moving along in their lives together until Joanna meets Laura, the stunningly beautiful work colleague whom Michael never mentioned. While Michael is away with Laura on a business trip, Joanna runs into an old but never quite forgotten love, Alex and agrees to have drinks with him. As the night progresses and temptation increases for the couple, each must confront who they are inside and outside of their relationship.

LAST NIGHT marks the directorial debut of Massy Tadjedin, writer of the unfortunately underseen 2005 film THE JACKET, but regrettably the director displays little of the originality that marked her previous effort. Following the story of Joanna and Michael Reed (Keira Knightley and Sam Worthington) over the course of a night when both will be tempted to be unfaithful, LAST NIGHT deals with the well-trodden theme of infidelity in a competent, but stale manner.

Joanna and Michael appear to be a well-to-do New York socialite couple, yet as they argue from virtually the first scene, it's a wonder that they would even be together in the first place. After being separated for a night by Michael's work commitments, what follows for the couple is a fairly standard 'will they/won't they' story of loyalty which, while admittedly ending rather unexpectedly, is let down by cliched and plodding writing. By choosing to open the film with an argument, Tadjedin faces an uphill battle creating any stakes, and as such there's no emotional investment in the characters, and it's difficult to really care about the survival of this marriage. The character of Joanne is also problematic, as she is established early as irrationally jealous, yet as soon as old flame Alex (Guillaume Canet) enters the picture, she almost seems to instantly forget her husband and run off for a night on the town. She's a generally unpleasant character, but Tadjedin insists on dedicating the majority of the screen time to her story, rather than focusing on the much more interesting story of Michael and his colleague Laura (Eva Mendes). Knightley makes the best of what she's given, but Worthington is the real surprise, delivering a solid and effective performance. Perhaps due to not being encumbered with a fake accent, he manages to breathe life into a largely under-written character and shows that there is more to him than just a wooden action hero. Again however, Tadjedin's clunky script leaves Worthington with a somewhat troublesome character arc, brought to an unconvincing conclusion that doesn't allow him to completely shine.

Truthfully there's nothing really wrong with LAST NIGHT, but there's certainly not much right with it either. It's a brisk 90 minutes that provides little freshness in territory that has been covered better many times before (films such as Mike Nichols' CLOSER spring to mind), and ultimately is a disappointingly dull effort from Tadjedin, following the promise of her previous script.