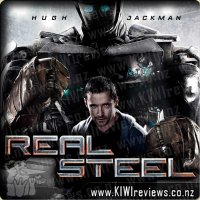 Disclosure StatementFULL DISCLOSURE: A number of units of this product have, at some time, been supplied to KIWIreviews by the company for the purposes of unbiased, independent reviews. No fee was accepted by KIWIreviews or the reviewers themselves - these are genuine, unpaid consumer reviews.
Available:
in cinemas now

Hugh Jackman stars as Charlie Kenton, a washed-up fighter who lost his chance at a title when 2000-pound, 8-foot-tall steel robots took over the ring. Now nothing but a small-time promoter, Charlie earns just enough money piecing together low-end bots from scrap metal to get from one underground boxing venue to the next. When Charlie hits rock bottom, he reluctantly teams up with his estranged son Max to build and train a championship contender.

Giant robots fighting. I just summed up the plot for you in three words. If you don't like big things, fighting, or mechanical constructs, then this movie is not for you.

I went through several phases in this movie, switching from interested, to bored, to annoyed, but ended up being so immersed that I was on the edge of my seat, punching in time with them.

The storyline moved too slow for me. When you have a movie about fighting robots, you need to show a lot of fighting robots. Having two top-of-the-line robots get absolutely massacred after one fight, is unacceptable. Especially when they belonged to Hugh Jackman. And so we went along and watched Hugh's son find a sparring robot that nobody believed in and they taught it to fight. Feel good story of the year? I've seen better.

But once they started showing you the battles in the rings, the crowds cheering for this little kid that danced with his robot that never gave up, I got reinvested. All of a sudden, the matches started taking longer, and we were seeing some real carnage, whether from malfunctioning equipment, or tactics. But the fights were exciting. Just like watching WWE wrestling, you know its fake, but you have a favourite, that you want to win, so you cheer when they hit, and you fret when they fall.

Giant robots fighting the most epic of battles. It was a relief when it finished, and I felt exhilarated. I just wish that it had been like that straight from the start.

Huge robots, beating the lubricant out of each other, while a derelict dad tries to work his way through a Devil's Deal over his son... hardly sounds like a kid's movie at first glance, does it? Strangely enough though, after seeing it, I can say that it IS indeed a kid's movie - because the kids in the audience LOVED it, while many of the adults were just sitting back and watching the fight scenes.

Now, from an adult's perspective: If you remove all the fight scenes, music and dance scenes... you have maybe 20-30 minutes of actual plot... and it's not exactly the deepest of plots. Does this remove anything from the movie's overall enjoyment? Not really actually... and this, of all else, is what surprised me the most. Seamless CGI effects, massive rankings on the "cute" scale thanks to young Mr Goyo, and a solid - if lacklustre - performance from Jackman.

The *biggest* disappointments for me, were the short lifespans of "Ambush" and "Noisy Boy" - they were some fine boxing 'bots and I really would have loved to have seen more of them. "Twin Cities" was also very cool, but I swear two heads just seems silly, when the 'drivers' are sitting ring-side anyway.

From the perspective of an 11yr old: Awesome robot fighting, loved the dancing scenes but really it's all about the robots. Oh, and did I mention he loved the robots? Plot? Oh! the storyline... ummm... it was about robots fighting, and some kid who danced with a robot. And his dad built cool robots.

Yeah... that's about what I expected really.

Overall, the one thing that made this movie amazing was seeing it on the huge IMAX screen in Auckland... the movie was good, huge it was better... all it needed was 3D to really top it off.

Fasten your ergonomic seat belt...you're in for a hilarious ride through the inner workings of Office Space, the outrageous hit comedy that "will strike fear into the little hearts of evil bosses everywhere."