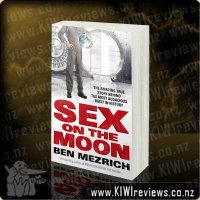 Sex on the Moon product reviews

Thad convinced his girlfriend and another female accomplice, both NASA interns, to break into an impenetrable laboratory at NASA's headquarters - past security checkpoints, and electronically locked door with cipher security codes and camera-lined hallways - and help him steal the most precious objects in the world: Apollo moon rocks from every moon landing in history.

Was Thad Roberts - undeniably gifted, picked for one of the most competitive scientific posts imaginable - really what he seemed? And what does one do with an item so valuable that it's illegal even to own?

Based on meticulous research into thousands of pages of court records, FBI transcripts and documents, and scores of interviews with the people involved, Mezrich - with his signature high-velocity swagger - has reconstructed the madcap story of genius, love, and duplicity all centred on a heist that reads like a Hollywood thrill ride.

This was one story that I had not heard about when it all happened but reading this book I did quickly find it pretty gripping and hard to put down.

The story is very well written if a little confusing at the start with some jumping around the time line. Unlike another reviewer however, I did not find myself rooting for Thad Roberts, unless you count rooting for him to be caught. While I did feel somewhat sorry for him because of the overly strict religious background he came from and the conditional love he experienced from his parents, I had trouble feeling sorry for him as he "reinvented" himself into a weekend warrior, prepared to take more and more risks which kept him riding a wave of popularity that he hadn't previously experienced. If I'm brutally honest, I felt like he came across a little in love with his new self and frankly, a look at his Twitter and Facebook accounts does little to change my mind on that. As the book talks about his incarceration, I also found myself wondering how much he really learned from all that happened.

Of course it can be hard to make accurate judgements based on book even if it has followed transcripts, FBI records and Thad Roberts himself. I'd highly recommend you read the book and draw your own conclusions. Either way it's a gripping story of the lengths some people will go to for love and more.

This book reads like a fictional story - and some parts are admittedly the invention of the author - however it's more than "based on a true story" in the Hollywood sense... it's based on the interviews of those involved in a very real, very public and very famous - if in limited circles - theft from NASA some years ago. Being an unashamed science/space geek, this was big news in the circles I float in... so to find this book had come out, I simply HAD to check it out... and boy am I glad I did. If ever there is a story that proves that "Genius needs constant stimulation or it gets bored and does stupid things" and "Love is not blind... it only seems that way because it lobotomises your higher brain functions" - then this is it. tah-dah!

Thad Roberts is a protagonist who will immediately get identification from any and every lonely "smart kid" who reads this tale... he's clever, he works hard, he's had a stunted social growth pattern, and he suddenly becomes someone whom everyone wants to know. It's power... heady power... and Thad lets it get to him and take him places he LOVES to go, but really shouldn't. So, as every reader will rapidly predict, he's in for a scenic tour down s**t creek, leaving the paddle on the shelf.

Personally, I have no idea how *I* would have reacted to the situations Thad find himself in, as his quiet, unassuming life gets turned upside down as soon as he discovers his girlfriend is pregnant... being part of a very conservative religious faction means that it's going to go badly no matter how they play it... so the answer is simple. Get out into the open world and try to keep your head above the tide line. This, he does. It's a familiar, but no less amazing tale of survival, sacrifice, and determination. Oh, and then it's turns into power-tripping, lust and sheer stupidity. No surprises there either.

If I hadn't watched this drama unfolding back when it happened, I would have sworn this was pure fiction... it's just incredible the antics Thad and his cohorts got up to to try and pull this off. The sheer genius of some parts, and the utter mindless naivety of others, beggars the imagination of the common reader, who will find themselves alternating between "Wow, OK, that's clever" and "You MORON! What are you THINKING?!"

Personally, I found myself rooting for Thad... his motives, though selfish in the extreme, are in no way malicious. He never set out to hurt anyone... it just panned out that way because of some notebooks that no-one but the owner ever saw, and more than a few bloody-minded bureaucrats who decided an example had to be made. As a loner who suddenly finds himself the centre of a social network consisting of all the kinds of people he only ever encountered in his wildest day-dreams... it's a tough allure to try and resist.

Overall, a stunning book, that you may, or may not, believe... If you have any doubts though, do a quick online search for "Thad Roberts NASA" and see what you get. It's... astounding.

Mira Chambers has an infallible gift for solving mysteries ...but using it comes with a price. Determined to regain her independence after ten years in orphanages, asylums and high security 'health sanctuaries' Mira leaps at the chance to help her friend Bennet Chiron, an enigmatic ex-con who risked his life to save hers and lost both his health and career in the process. Mira plans to investigate the murder-robbery that put him behind bars for ... more...