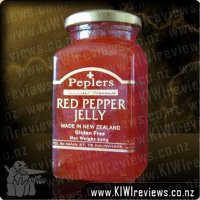 Disclosure StatementFULL DISCLOSURE: A number of units of this product have, at some time, been supplied to KIWIreviews by the company for the purposes of unbiased, independent reviews. No fee was accepted by KIWIreviews or the reviewers themselves - these are genuine, unpaid consumer reviews.
Available:
at selected quality retailers and via online store

Handmade in small batches to ensure quality, and using only the best quality, natural ingredients, this sweet jelly has absolutely no artificial colours, flavours or preservatives added.

Great on it's own as a spread, or as part of cooking a meal, this is a very surprising, very versatile jelly.

Never having been a real fan of most preserves, especially the English-style Jams and Jellies, this was sailing into a headwind before the jar was even opened. I figured that if it rated anywhere above 'barely tolerable' with me, it was probably going to be a good one for those who do appreciate such things... well, it passed that benchmark easily.

Firstly, I tried it on some plain, unbuttered toast. That was as close to 'straight taste' as I could get it, I just couldn't bring myself to eat it straight from the jar. It actually surprised me with how mild but tasty it was. None of the fire or sting I was expecting, but not a plain, bland 'it could have been a dessert jello' either... it had a nice delicate sweetness from the pepper flesh, and just a hint of bite from the seeds, leaving it as a nice middle-range taste.

Taking a hint from some other, similar, products also on the review schedule, I coated some beef burger patties in the jelly - after blending it vigorously with a fork to break up the 'blob' - and slapped them on the grill, giving a few more brushes with the jelly as I flipped them. What a difference! The patties are a staple BBQ favourite in our house, so we know the taste very well, but this stuff really added a nice new dimension and a little tingle to them that really did give the flavour a lift. The heat from the BBQ sort of caramelised the jelly, giving it a nice marinade consistency that coated the patties perfectly, without turning to glue or dripping away. The flavour was certainly best on the patties I grilled, over those I cooked on the plate, but both were something special when compared to the regular, un-jellied pattie.

Taking heart from this, I made a savoury mince dish a few nights later, and took the chance to divide it up into portions to try with various products. In one portion I mixed through a tablespoon of the jelly and gave it a final heating through before serving it on plain rice. I prefer using rice as even plain pasta has a flavour and texture that change change the taste of meat dishes, while boiled or steamed rice carries no flavour of it's own, but provides texture and bulk to a dish. This dish, when tasted against the mince without any added products, was clearly the winner. That delicate sweetness came through again, as did the slight heat from the seeds. Delightful!

Overall, though I didn't try even half of the ideas we had planned, this was enough to reassure me the product has some definite appeal even to those who aren't fans of jellies, peppers, or both. If used in cooking, the heat turns this into a wonderful glaze, sweetener or marinade, and adds a nice lift to even the simplest dishes. I want to explore the possibilities when it comes to cold dishes, such as being used in a salad dressing, but that will have until I can get some more- the jar is almost empty.