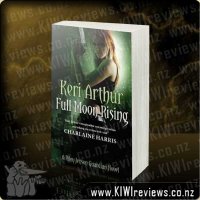 A rare hybrid of vampire and werewolf, Riley Jenson and her twin brother, Rhoan, work for Melbourne's Directorate of Other Races, an organisation created to police the supernatural races - and protect humans from their depredations. While Rhoan is an exalted guardian, aka assassin, Riley is merely an office worker - until her brother goes missing on one of his missions. The timing couldn't be worse. More werewolf than vampire, Riley is vulnerable to the moon heat, the week-long period before the full moon, when her need to mate becomes all-consuming. Luckily Riley has two willing partners to satisfy her every need. But she will have to control her urges if she s going to find her brother. For someone is doing some illegal cloning in an attempt to produce the ultimate warrior - by tapping into the genome of nonhumans like Rhoan.

Now Riley knows just how dangerous the world is for her kind - and just how much it needs her.

"Full Moon Rising" is a fantastic, fast-paced, edgy novel filled with plenty of action and a great mixing pot of supernatural creatures. Within a few pages, I was totally enthralled and everything else was put aside (including sleep!) because I simply couldn't put this awesome book down!! Be warned though, it's definitely one for more mature audiences with its rather steamy, heavily sexual content. This is the only part of the storyline, I will admit, that I wasn't so keen on as I felt Keri Arthur went a bit overboard with the number of sex scenes she has in the book, so many readers might be put off because of this, but the actual main storyline, while reasonably familiar (crossbreeding supernaturals to get the ultimate warrior), is a thoroughly enjoyable one.

The main character/heroine, Riley Jenson reminded me a lot of Laurell K Hamilton's well known character, Anita Blake with her tough, stubborn, feisty, reckless, impulsive, bed-hopping ways, and the style of the novel was similar too, so if you have read and enjoyed Hamilton's "Anita Blake: Vampire Hunter" series before, you will most likely enjoy Keri Arthur's "Riley Jenson: Guardian" books too. I loved how Riley made no excuses for the way she lived her life. She was (part) werewolf, and proud of it, no matter who had problems with that side of her. The main male characters were a little on the predictable side, but there is more to some of them than first appears.

There is pretty much non-stop action in this story, with its heroine not really getting any decent "down-time", so if you're after a quick read with a huge helping of supernatural action then Full Moon Rising is definitely worth reading... just don't be expecting much in the way of actual romance, as Riley is far too busy trying out different bedmates to actually focus on falling for anyone. I do however think this book is rather over-priced... $20 or less would've been more what I'd willingly pay for this.

Models, spies and lipstick gadgets in this fast-paced teen series. Jessica Cole has been recruited to Westwood, MI6's secret division of supermodel spies. Her first official mission seems simple at first, until it turns into the biggest cyber-attack ever known, threatening the security of the whole country.

Then it emerges there is a traitor in the midst at MI6 - and suddenly Jessica herself is being accused. With no one ... more...