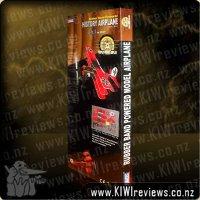 Disclosure StatementFULL DISCLOSURE: A number of units of this product have, at some time, been supplied to KIWIreviews by the company for the purposes of unbiased, independent reviews. No fee was accepted by KIWIreviews or the reviewers themselves - these are genuine, unpaid consumer reviews.
Available:
At selected quality retailers

Claim the skies with your very own 1917-era red tri-plane fighter!

Wind up the propeller, launch it into the air, and watch it soar. No glue or tools required, and easy to assemble, this plane is suitable for ages 8 to 80.

Made from sturdy but lightweight materials, this plane will be a sure-fire hit for Summer fun in the park, or use in large indoor spaces.

I'm a bit of a history geek so a disclaimer up front that some of my comments are influenced by that.

On picking up the box the first thing that struck me was that this was a Rubber Band Powered "Airplane" as opposed to an "Aeroplane" so for a start the product was on the back foot with me. The model itself is of one of the most famous planes of the World War I era, the Red Baron's Fokker Tri-plane, yet nowhere on the box does it make mention of this which I can only assume is due to licensing reasons. So far 0 from 2.

Putting the model together was relatively straight forward and fortunately the instructions were barely needed as they were both very small an not very clear. The one concern that I did have upon completion was that there were left over stickers that hold the wings firm and in place, which due to the aforementioned unclear instructions, I was left guessing what they were for. My best guess was that the sticker sheet was designed to be used with any of the planes in the range and that's why there were left overs, but again that's just a guess.

So what do you now do when you have a freshly built rubber band powered tri-plane and the weather is rubbish? Clear off the coffee table and launch it inside of course. The propeller does need to be wound approx 150 times for full effect but when it is and the rubber band is tight, the power generated by this plane is quite impressive and it was soon discovered that although we have a reasonably large lounge area this was not what was meant by "large indoor space" on the box as the model went careening into the entertainment unit at the other end of the lounge. Large indoor space obviously really does mean either a hall or corridor where the plane will not have to make such an abrupt stop.

The plane is made from a sturdy combination of balsa wood and Styrofoam, with plastic fittings and comes with a spare rubber-band for when the original has been wound too many times. Despite it's lack of true historical authenticity, the use of a US English modified word to describe a European plane, and poor instructions, this toy is what it is, and that is ultimately fun for kids of all ages.

Earth's first line of defense against the DECEPTICONS is here! Hidden from his enemies in vehicle mode, BUMBLEBEE waits and watches until he is called upon to protect Sam and any other humans that come under threat from MEGATRON. He is a cunning warrior against evil, and dedicated to those he calls his friends. When danger threatens, he converts to robot mode with his plasma cannon blazing!