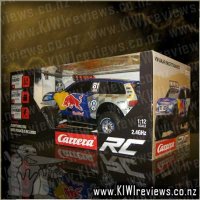 Carrera RC is a guarantee for maximum driving enjoyment. The Red Bull design is a sign for pure energy. The latest hi-tech machinery produces the best possible driving experience.

All these strengths have been packed into a light and robust special plastic body. In short: Your new Trophy Truck provides perfect grip and interruption free 2.4 GHz-technology. Drive hard - and finish successfully!

This model only has one speed - full tilt - so it's not suitable for use indoors unless that means an indoor sports arena or other similar large space. It's designed for speed racing, not chasing the kids up and down the hallway.

Because it's designed for speed, it's not designed to take hard knocks, so do try your best to avoid trees, steps, rocks, and parked cars, because it is very easy to break the bodywork - which is basically little more than a cosmetic airflow shell. If you manage to knock off the roof-mouted lights though, fear not - they are not fixed parts of the bodywork, they are designed to be removable if you so desire, so will slot back in unless you have done some serious mayhem on them.

Sturdy and with plenty of grunt, and with 4-wheel drive, this model had no problems hammering across a month's growth lawn, with grass tall enough to reach up to the top of the wheel arches. Sure, it wasn't exactly zippy, but it left the Power Racer chasing the tyre tracks behind it, which goes to show the sheer power.

Wheel alignment is a little different on this model. Instead of being a manual adjustment on the chassis, it's digitally controlled at the handset, making on-the-fly adjustments simple and very effective, though it seems to make bigger incremental steps, meaning you can't really 'fine tune it to perfection', but have to settle for 'at least in the right general direction'.

After running this little beauty around a nearby park - which it turned out had a well-hidden mud patch in a slight dip - we had the joy of discovering how easy it is to get this thing utterly caked in dirt, water, grass clippings and of course, mud. With the bodywork being little more that a shaped piece of thin plastic, the crud got scooped up by the wheels, flung up and under the bodywork, and scattered all through the innards. It was a mess! (You can see what lengths we had to go to in order to clean it up from the photos that form part of the closing credits of the Playtest Video, coming soon on our YouTube channel - it took 3 litres of water, 2 hours of careful toothbrushing and 18 wet-wipes!)

This little beauty handled itself amazingly well really, churning through the mud, running up hills and zooming back down them, much to the delight of a group of kids playing nearby who chased it giggling and laughing all the way. One thing I did notice though was that it had a tendancy to get up on two wheels briefly if I slammed it into a tight turn on a sloped surface, and occassionally it would roll over and 'go turtle' on me some times. Most of the time, if I was careful and gave it a bit of a goosing just at the right time, I was able to get it to flick itself back onto it's wheels and it ready to run off once again.

Having a full 4-wheel drive and proper gearing, this model was capable of going just as fast backwards as forwards it seemed, though that may be partly due to the terrain I was running it around, but still, it was amazingly fun to put through it's paces and I look forward to better weather so I can run it around the sand out at Raglan Beach - this time of year is certainly not the best for that kind of antics. Mind you, considering how well it coped with mud and grass clipping all through it's innards, a bit of damp sand might be someting it can cope with easily... could be worth checking, do you think?

Either way, with a bit of bouncing that certainly showed the sprung suspension worked perfectly, it seemed to handle a number of rough terrains with ease, and the only thing the caused stoppage was when it slid on some mud, and went sideways over a stick which miraculously managed to shove the power switch off. A 1-in-10,000 chance occurance... that I managed to make happen twice.

(The second time it was deliberate to see if my guess had been right.)

One of the things I discovered during the disassembly was that the shell comes with factory-installed housings for mounting LED lights - 2 each side in the front, and a single red each side at the rear... for those who want to make this a little more accurate I suppose. Jolly fine of them to get you half-way there... but I found myself wishing they had gone the whole hog and installed lights. Surely it wouldn't have deducted more than a few minutes off the play time in terms of added battery drain? After all, LED's chew next to nothing, power wise. It was the one and only 'downer' for me. I was even chuffed to disover that unlike cheaper toys, the spare wheel on the back is just that, a spare wheel that can be swapped into active duty should you manage to tear up a tyre somehow. awesome stuff!

Overall, a brilliant toy for kids of all ages. Sturdy enough - as long as you don't crash it into a wall or something equally solid, thus in all likelihood cracking or shattering the fragile body shell. With a proper differential on both axles, 4 wheel drive, digitally-adjustable steering bias on the controller, and running on a powerful 2.4GHz frequency, this really does have everything for those who want more than a kids toy, but less than a high-end multi-thousand dollar 'enthusiast'-level model. It's a great 'mid-range' RC to play with while you either decide to move on to something bigger and more customised, or agree with your wife that it's time to put the mid-life crisis behind you and get on with being mature and responsible again.

Your Princess Twilight Sparkle figure talks, sings, twinkles, and moves! Now she's got an amazing pair of wings that make her seem even more magical. They light up when you touch them and they flutter when you glide her along! This Princess Twilight Sparkle figure is just the pony pal for all your My Little Pony adventures. Help her get ready for a grand celebration. You can style her beautiful hair with the included comb and put her ... more...