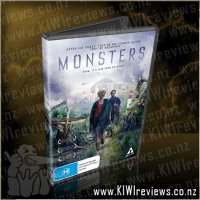 Six years ago a NASA space probe crashed to earth with alien stowaways on board - in the time since a section of the Mexico-US border has been fenced off and is now quarantined as an 'infected zone'. Today the American and Mexican military still struggle to contain "the creatures".

MONSTERS follows a U.S. journalist escorting an American tourist through the infected zone in Mexico to the safety of the U.S. border, all the while trying to stay alive in an alien-infested war zone.

Monsters is a one-of-a-kind hybrid a cross genre road movie love-story that travels into the heart of an alien-infested war zone.

'Monsters', the debut film from director Gareth Edwards, follows something of a new trend in monster cinema laid down by the likes of 'District 9' and 'Cloverfield'. Rather than simply imitating their style however, Edwards crafts a savvy blend of the two, presenting the film in a realist fashion, adding a level of believability not often seen in this genre. Focusing on the relationship between the leads, the spoiled daughter of a media tycoon and the photographer sent to escort her from Mexico back to the United States, it would be easy to write the lack of action off as a limitation of the obviously small budget, yet 'Monsters' excels in its use of allegory to send an important message.

In any good monster film, whatever creature(s) appear are usually nothing more than a terrifying physical manifestation of a larger issue. Just as 'Godzilla' is about the threat of nuclear power or 'The Host' is about American military presence in South Korea, 'Monsters' has a lot to say about illegal immigration between Central America and the US. Placing two young and seemingly wealthy Americans in the undesirable position of trying to cross the border illegally presents an interesting perspective on the plight of illegal immigrants and the challenges they face in search of a better life. The titular monsters themselves are a constant threat, yet they are more or less relegated to the background for the majority of the film. The characters' real problems come more in the form of the corrupt bureaucracy standing in their way, but to say any more would be to spoil the surprises in store when the border is finally reached. The subtlety Edwards displays at the beginning of the film slips away a little toward the end, but the message is clear and affecting.

'Monsters' is a great debut from Edwards, and the rumour that he has subsequently been chosen to reboot the 'Godzilla' franchise is very exciting indeed. If he can bring the same level of intelligence and nuance as he did with 'Monsters', maybe we can thankfully all forget about the last attempt from Roland Emmerich.

If you are wanting to watch a true monster movie with blood and screaming, graphic violence and CGI to blow your mind then this is not the movie for that. This is a character driven film that happens to have aliens in it. Personally the former is much more my style so I was a little dubious going into this as to how I'd enjoy it.

First thing I noticed is that Monsters is very reminiscent of "28 Days Later" in the style of the filming (awesome!). It was filmed on a $15k budget with no real script but don't let that fool you. This movie is a gem.

The leads, Scott McNairy and Whitney Able, gave very solid, believable performances. Everything we learn about these aliens, the monsters, we learn second hand, from other characters. It's quickly apparent that the world is turning into something much different from what we currently know and there is a desperation to get into a safe zone and away from the "infected area". With this background, is the love story between the two main characters. The worst thing I can say about this movie is that the love story is more than a little predictable but I suppose there are only so many ways it can go.

The thing that I really love about this movie though is something that reading other reviews, I'm pretty sure many have missed. It's the subtle social commentary on the way we often view things we don't understand. I would really recommend watching this movie with an open mind and putting aside the alien background story. It's well worthwhile and may just get you thinking.

Scrat's epic pursuit of the elusive acorn catapults him into the universe where he accidentally sets off a series of cosmic events that transform and threaten the Ice Age World.

To save themselves, Sid, Manny, Diego, and the rest of the herd must leave their home and embark on a quest full of comedy and adventure, travelling to exotic new lands and encountering a host of colorful new characters.