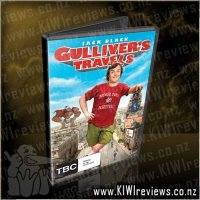 In a modern take on the classic tale, Jack Black is Lemuel Gulliver, a lowly mailroom clerk at a New York newspaper. After Gulliver bluffs his way into an assignment writing about the Bermuda Triangle, he travels there only to be transported to an undiscovered land, Lilliput.

In this fantastical new world, Gulliver is, at last, a bigger-than-life figure - in size and ego - especially after he starts telling tall tales, taking credit for his world's greatest inventions and placing himself at the centre of its most historic events.

Gulliver's position is enhanced even further when he leads his new friends in a daring battle against their longtime enemies. But when Gulliver loses it all and puts the Lilliputians in peril, he must find a way to undo the damage. Ultimately, Gulliver becomes a true giant among men only when he learns that it's how big you are on the inside that counts.

I was never a particular fan of the book when I was younger, it wasn't in my home library, and I only read it once and decided that that was enough for me. When I saw the trailer for this I was quite doubtful (as I didn't feel Jack Black had been in top acting form at the time), so we waited for it to be on hire at the DVD store.

While it was a fun movie, I'm glad that I didn't pay to go see it when it first came out as I would have felt my money better spent. Some things I enjoyed, such as the robot fight scene, but most of the humour I found to be either over the top or not that good for my young children.

I will probably watch this again, either when it comes on TV, or the kids are a bit older, as it was enjoyable, but it's not watch over and over again material.

Parents choosing this movie for their children need to recall - the original book was written as a satire for adults, to examine prejudice, the class system and religious freedom.

We chose the DVD to entertain two visiting children, basing the choice on the cover poster only.

As the two youngsters (of ages 10 and 9) watched this, (they'd both read an abridged version of the original book) I realised they were bored, and at about that hilarious point of Gulliver dousing the fire with his own water (as included in the original book) they asked if we could switch it off.

The elder child then asked where could he get a copy of the unabridged book, as he wanted "the real story, not that mucked up American rubbish". So we drove to a second-hand book store and found him the adult book.

Reading it aloud to the younger child gave them both more entertainment than the movie did. Sorry - not all kids will react like these two, but when you know Jonathan Swift's book, most film versions come up short - this, shorter than most.

This DVD is the bomb! I loved everything about and it has a level of humour that reaches space! The cover looked good, it really made this movie something I wanted to watch. When I first saw this thing, I had some pretty high expectations for the enjoyment level, and I've seen some very cool movies before, but this one is a "giant" compared to the others (lol).

I think that the advertisements at the beginning were great, I now want to watch the movie "Voyage of the Dawn Treader" more than ever now thanks to the ad for it. The film started off great, I was however horrified when Gulliver gets sucked into an inverted whirlpool, It made my heart skip a beat or two.

This movie really adds a modern-day twist to the old tale of "Gulliver's Travels", although when Gulliver had to urinate on the grand palace to put out a fire, I think that was going a little too far! I loved the robot (that was built by the army commander of Lilliput when he wanted to get rid of Gulliver), it was cool. I also liked the way it went from looking like a giant trash can to a super-cool robot, it was like a Transformer changing.

"Gulliver's Travels" is good for kids 11+ since this film has some parts that aren't suitable for young children. You have got to be pretty darn serious to not like this DVD; it is too good to miss. Hope you like it.

In the sleepy small town of Centerville, something is not quite right. The moon hangs large and low in the sky, the hours of daylight are becoming unpredictable, and animals are beginning to exhibit unusual behaviours. News reports are scary, and scientists are concerned, but no one foresees the strangest and most dangerous repercussion that will soon start plaguing Centerville: the dead rise from their graves and feast on the living, and the citizens must battle to survive.