Home > Categories > Movies > Comedy > Life As We Know It review

ProdID: 2856 - Life As We Know It
Directed by Greg Berlanti 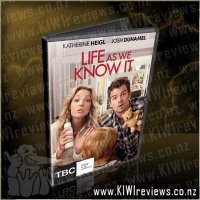 Life As We Know It product reviews

After a disastrous first date for caterer Holly and network sports director Messer, all they have in common is a dislike for each other and their love for their goddaughter Sophie.

But when they suddenly become all Sophie has in this world, Holly and Messer must set their differences aside. Juggling careers and social calendars, they'll have to find common ground while living under the same roof.

I quite enjoyed this movie, as did my husband. We rented this as we had seen the trailers and thought it looked to be a funny and sweet movie.

I found it quite saddening when Sophie's parents died, as I'm sure most people would, but had to laugh at these two people, who had been set up on dates together being suddenly thrust into the world of parenthood.

This had plenty of laughs and moments that had you, as a parent, fondly remembering your child's first steps, and fascination at the world. The only problem that I found with the film, is that like most movies these days, the plot line was predictable. Tow opposites forced into a situation due to some sort of loss, fall in love, separate and then get back together to create a loving family.

Still, it was a fun, lovely movie and one that I would recommend for a chick flick night.

This is a sweet, funny story of 2 people who can't stand each other, but are best friends with the same couple. Tragedy strikes and suddenly they're thrown together to look after their friends' baby daughter... can they do it without killing each other?

Within a few minutes, this movie had me seriously cringing! But once they took over custody of Sophie, it was a constant switching between the cringing and falling off my seat laughing, then crying at the end (yes, if you're a softie like me, keep the tissues handy!)! Katherine Heigl was greatly suited as the tightly strung worrywort caterer Holly, who struck me as a similar role personality-wise as her role in the far more serious tv series, "Grey's Anatomy". The far more laid back, fun-loving, devil may care, playboy style "Messer", played by Josh Duhamel, made for a great contrast with Holly, and their constant bickering over every little thing and attempts to annoy the heck out of each other at every opportunity possible really came across like two little kids fighting in a playground... who are going to have to grow up hard and fast as they learn to take care of this baby suddenly and tragically left in their hands.

The other "love interest" for Holly, Dr Sam, played by Josh Lucas, is very much a typical role for Lucas - sweet, quiet, dependable... which also unfortunately makes him rather dull, boring and a bit wet and wimpy. Out of the group of "helpful neighbours" that pitch in to offer advice to Holly and Messer on how to raise Sophie, most are just your typical gossipy friendly types, but "DeeDee", played by Melissa McCarthy is rather irritating and annoying, and regularly makes me cringe with her simpering, sickly sweetness.

I found the movie to be sweet and funny, but predictable, with the expected "happy ending", and there were many moments throughout where it will bring back memories for those who have been first time parents. Great for a bit of eye candy and a giggle or two, with actors well suited to each of the main roles, as they're ones they've played several times over. Typical "chick flick" really.

Score: 9.3
Product reviews for listing 5625: Out of the Furnace
Directed by Scott Cooper

From Scott Cooper, the critically acclaimed writer and director of Crazy Heart, comes a gripping and powerful drama about family, fate, circumstances and justice. Russell Baze (Oscar Winner Christian Bale) leads a dead end life - he works a meaningless steel mill job all day, and care for his terminally ill father at night.

When Russell's brother Rodney (Casey Affleck) returns home from Iraq, he is lured into one of the ... more...