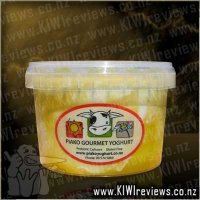 Our yoghurt is based on Grandma's recipe a thick creamy Australian Greek style yoghurt, originating from Queensland, but now full blown kiwi made using only the best local New Zealand ingredients. Free from preservatives and artificial ingredients the 100% natural yoghurt is rich in benefits and 95% fat free.

Health benefits include, a pro biotic containing acidophilus, bifidus and casei culture strains. All which assist in boosting the levels of good bacteria in the body more specifically the gut system.

Mango - Using Australian mangoes, it's the best kept secret that we make, delightful and summery using the world's most widely utilised fruit.

After trying a few of the other delicious flavoured yoghurts from the Piako Gourmet Yoghurt range, I decided to buy another of the yummy flavours today while we were doing our grocery shopping. As Miss 3 had loved the yoghurt just as much as me I allowed her to pick the flavour, mango was the winner (purely chosen by the colour I believe). I was hoping that this yoghurt would meet my expectations due to my love of the spiced apple and mixed berry varieties which I tried previously.

When I opened up the pottle of yoghurt there was a rather small puddle, not very thick at all of mango sauce on top of parts of the yoghurt, my initial thought was that there really wasn't a lot of sauce, however as I examined the pottle further and dug a spoon into it I found that the mango sauce had actually flowed into a hole in the centre of the yoghurt, and also down the sides of the inside of the pottle, I thought that perhaps this was because the sauce itself seemed to be quite a heavy syrupy, texture. While the mango sauce was nice, don't get me wrong I do feel that it could have done with a bit more flavour, you could taste the flavour of the mango don't get me wrong but I found it very weak and watery really, there was a good amount of it at least!

The yoghurt was thick and creamy, just like the yoghurt that I had really enjoyed from my previous experiences of eating Piako yoghurt, it was sweet but not to sweet, just right really. Miss 3 enjoyed this yoghurt at lunch with me, and was more than happy to gobble it down, as was I so no complaints really. I love that this yoghurt is full of probiotics, and lots of good bacteria and am sure if we continue to buy this yoghurt it should help us stay bug free in the coming winter months.

I certainly wouldn't say no to buying this yoghurt again, however there are other flavours that sit higher up on my favourites list.

I got some Mango Piako yoghurt while at the beach. I figured it would make a nice addition to my beakfasts in the morning. One evening after fish and chips for dinner, I offered some of this yoghurt for dessert. My 5 year old was not very impressed. She said that the yoghurt was slimy and tasted not quite good or like anything at all. That was okay though, all the more for me. She is very picky and yoghurt is very much dependent on the day with her.

For me, the Mango was not my most favourite flavour in the Piako range. However, I loved the greek style creamy yoghurt. I also found the Mango to be a lot more versatile than the other flavours I have tried. One evening I opened a packet of Sour Cream and Chives chips and then used the Mango yoghurt as a dip. This worked quite well considering I didn't have anything to add to the yoghurt. The mango was a bit on the sweet side, and would have benefited from a dash of lemon or vinegar and salt and pepper too or some herbs.

The other thing I tried was freezing a portion of it. I didn't have my ice cream maker with me, so I just added a couple of spoonfuls into a bowl. Then I stirred it every 30 minutes to stop ice crystals forming. The yoghurt froze pretty quickly. It made a delicious frozen yoghurt dessert. I can't wait to try the other yoghurts in this Piako range.

This Piako yoghurt is better than the "Piako Natural" and is almost as good as the "Mixed Berry" one as well, so thumbs up to Piako! It wasn't as nice as I was hoping it to be, and it gave me a vague queasy feeling, even though this yoghurt was before its use-by date.

I must say that this product looked a little repulsive un-stirred, but after a bit of stirring it around it looked nice and creamy, and it had a great texture as well. I could defiantly taste the mango in the yoghurt, so you don't even have to look at the lid to find out what flavour it is.

I would say that this would be a great flavour for you to try, it goes well with a banana and is sure to be good in a smoothy, so try some "Piako: Mango" today!

I wasn't too sure what to expect from a Mango yoghurt, but I was pleasantly surprised, it had a nice rich flavour and a great smooth texture. One thing I was worried about which i have seen with other mango flavoured products is that sometimes the mango taste is too much and just overpowers everything, but not this product, I found the mango taste to be just right and not too strong.

This is a great yoghurt to have either by itself or even mixed with some other fresh fruit, in my case I had it with some bananas and it was a perfect compliment. I will be sure to add this to my shopping list in future.

I thoroughly enjoyed this creamy yoghurt. Of all the flavours this was the 2nd favourite of my son (5 year old) but he couldn't eat too much of it. It's pretty rich.

I think it tastes best when nice and cold out of the fridge. I found if I let it sit a little while it tasted too creamy for my taste. Overall it feels pretty decadent to eat.

This yoghurt has a Weight Watchers value of 3 Propoints for 100gm (1 serving or 1/5th of a container) which is pretty good. Interestingly this was less than the 4 Propoint value of the equivalent amount of the Natural yoghurt - so go the fruit yoghurt!

I also have never had mango flavored yoghurt before, what a wonderful yoghurt.

Full of flavor, light, creamy and just yummy really! Although it could do with more Mango sauce in it, as I found I had to give it really good stir to get the flavours flowing.

Anyone who wants a yoghurt that is substantial quality and tastes great to the last bite. You will not be disappointed in the range at all.

Overall, this was very enjoyable.

I have never had mango flavored yoghurt before, so was very impressed with this. Well done Piako, what a wonderful yoghurt.

Full of flavor, light, creamy and just yummy really! The kids enjoyed it with their cereal, and I enjoyed it on its own. The flavor was not overbearing...just right for the size of the tub.

I have been very impressed with the Piako gourmet yoghurts. They will be regular items on our shopping list, and I would highly recommend them to anyone who wants a yoghurt that is substantial quality and tastes great to the last bite. You will not be disappointed in the range at all.

Well done Piako, they are yummy!

Piako's "Mango" flavoured yoghurt had the typical thick creaminess that seems common in all Piako yoghurts, along with a mild tasting fruit pulp, that was sweet, without being overpowering but didn't really have that much mango flavour at all. Just like the "Mixed Berry" flavour, the yoghurt needed a good mixing to get the fruit flavour through it, but even then it was the taste of the yoghurt rather than the fruit that came through the strongest.

Unfortunately, it seems the Piako yoghurts do not have a very long life span. Most of the common brands of yoghurts, Fresh n Fruity/Yoplait etc, can usually be eaten up to a week (and occasionally more) past their "best before" date without tasting strange or causing any issues, and usually have several weeks (sometimes even over a month) after purchase before it reaches that date. However, I'd only had the Piako tubs for about a week when they had reached their best before date, and after leaving some of the Piako Mango yoghurt until it was a day past its "best before" date, the lid had started to puff up a bit. Then, after having a few mouthfuls, I started feeling slightly queasy about half an hour later. So my advice would to keep a close eye on the best before dates, and make sure any Piako yoghurts you purchase are eaten before that... don't risk even a day past it.

Aside from the short life span, this was still a very tasty, if rather mildly flavoured yoghurt, and another one that would do nicely in a smoothie, or on its own.

This flavour was quite tart, but also had a nice thick, smooth and creamy texture. Went well with my morning cereal, without the need for any extra fruit.

Overall, this was very enjoyable.

This is a real, great yoghurt with a really nice balanced flavor throughout the whole tub.

I found it had just the right amount of Mango to flavor the yoghurt without being overpowering. I really enjoyed the smooth and creamy texture of this one and I must admit I could not stop after a few spoonfuls. I ended up eating the whole tub in one sitting and I found that, unlike most yoghurts, this did not give me a sore tummy and I did not feel bloated after doing so, like I have been known to get with other brands when I eat the whole thing.

Overall this is a divine Mango yoghurt and I have since bought some more, as I felt I can not get enough of this wonderful flavor.