Home > Categories > Books > Kids - Junior > 100 Most Awesome Things on the Planet: Prepare to be Amazed! review

ProdID: 2798 - 100 Most Awesome Things on the Planet: Prepare to be Amazed! -  Written by Anna Claybourne 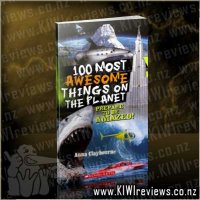 100 Most Awesome Things on the Planet: Prepare to be Amazed! product reviews

Can you imagine what it's like to stand on top of the world's tallest building? To ride in a rocket plane? Or to witness the biggest waves on the planet?

From the highest mountains to the deepest canyons, from the most powerful engines to the fastest trains, this is your ultimate guide to everything - tallest buildings to coolest creatures, hottest deserts to creepiest mummies, and much more!

Each amazing entry includes an 'awesome' rating and all the incredible details you need to picture being there yourself. A spotters' guide to volcanoes: how they form, what happens when they erupt, how best to survive if you're caught in an eruption.

Patterns of the Earth
Rating: 9.3

The info was great, I learned some stuff that I found rather interesting, like the fact that the fastest speedboat in history was home-made, and that there is a real underwater city in Jordon, a city in Egypt.

The facts in this book were also rather useful, now I know about some things to look out for, like Monarch Butterfly migrations, and places I want to visit, like the Palm Islands in Dubai. I would recommend this book for people 7 years and up since there isn't any violence or bad language, and there are a lot of things young kids can learn from this book.

I recon the author, Anna Claybourne, did a good job on her second book, it was better than the last one since it didn't make you want to puke your guts out, and it was much, much more interesting.

If you want to know about the coolest things on the planet, then this book is for you, it's so cool, your fingers might freeze if you pick it up (just kidding!).

Arthur Penhaligon doesn't expect to be a soldier - after all, he's the Rightful Heir, he wields the first three powerful Keys to the Kingdom, and he has a broken leg. But when he returns to the House, determined to defeat the Morrow Days, there's no escaping Sir Thursday's inexorable plan. Forced into the Glorious Army of the Architect, Arthur is drafted to serve for a hundred long years.