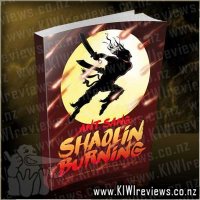 Old China like you've never seen before. Shaolin Burning is an exciting, modern take on Kung-Fu mythology: a fusion of punked-up street culture and chinese tradition.

When the Shaolin Temple is destroyed by the Emperor's army, only five monks managed to escape alive. Or so the legend says. But few know the story of the sixth, Monk Who Doubts, who turns his back on the Buddhist path and embarks on a bloody trail of revenge, culminating in a devastating showdown with the Emperor's forces.

Fewer still know the story of Deadly Plum Blossom. Unwanted at birth, she is rescued and raised by a Shaolin nun. Trained all her life in a new fighting style, she is determined to prove herself, and sets off to challenge the most dangerous man in China.

Shaolin Burning is a masterful interweaving of Kung Fu legends, Chinese history and stories of those lost to the past. it is a story of breathtaking beauty and no-holds-barred action sequences and is, at heart, a meditation on the dangers of pursuing one's talents.

An epic tale, told in an epic fashion... this is a must-have for every kid who ever loved sneaking a midnight read of action comics under the duvet with a torch.

As a retelling of the story of the fall of the Shaolin Temple, this has to be one of the most enthralling ones I have come across. As a lapsed practitioner of the Shaolin 'Nam Pai' style of Kung-Fu, it was a part of the tradition and history taught to all young students, as a way of connecting them to the lineage of masters who took up the banner handed down by The Five - to keep Kung-Fu alive. Though I had always though the 'Wing Chun' style was a modern style developed and mastered by Bruce Lee... so the climax of this story was a bit surprising.

I liked the way Ant Sang included a homage to Martin Emond, who has been a leading light and inspirational figure in New Zealand 'graphic novel'dom for many years. I had the joy of reading some of his early work during my university years and have to tell you that the homage was a very apt one, and in a style any fan of Emond's work would recognise.

Overall, this has to be a landmark in NZ Garphic Novel publication, and one well worth considering for your collection. Priced right at the 'consumer' line, rather than the 'dedicated fan' line, this is one that will have a wide appeal I think. The tie-in with the iconic "Bro'Town" series is sure to make even the most dubious reader willing to 'give it a go, mate'. "I am off to read Shaolin Burning... again... I could be some time."

'The Marvel Vault' brings the universe to you, sharing the insiders story of Marvel Comics from 1939 to the present. Chock-full of historic and never-before-seen memorabilia (think: early sketches of Sub-Mariner and the Human Torch, Bullpen birthday cards, and a membership certificate for the Merry Marvel Marching Society), this vibrant chronicle contains over 30 plastic-encased archival gems that you can hold in you hand while reading about the ... more...