« Pie in the Sky - A Second Helping review 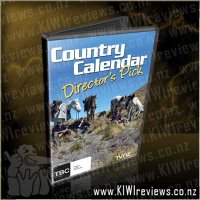 Disclosure StatementFULL DISCLOSURE: A number of units of this product have, at some time, been supplied to KIWIreviews by the company for the purposes of unbiased, independent reviews. No fee was accepted by KIWIreviews or the reviewers themselves - these are genuine, unpaid consumer reviews.
Available:
November 2010

Most Kiwis can probably hum the tune to Country Calendar, or at least roll it over in their heads while tapping it out on the steering wheel.

The show, which tells the stories of hardworking folk from the heartland, is now in its 45th year, making it New Zealand's longest running television show. It came to life in April 1966 at a time when wool was one of the mainstays of the country's economy.

This DVD is a celebration of the 45 years of Country Calendar with a collection of episodes chosen by Executive Producer Frank Torley, who has been with the Country Calendar team for the past 35 years, and is the voice of the show.

I was shocked to watch this dvd and see how far back the directors picked to go with this. Some of the "story's" were well before i was born and i really enjoyed seeing how country calendar has come as a show and how NZ farming has changed.

My 2 personal favourite "stories" were the blind bee farmer from the Waikato and the vintage machinery in Canterbury. The first i mentioned is a story of determination and wit. I believe that the company may still be running today. The second is a re-enactment of days gone by and how simple things like wheat harvesting were not so simple and a real team effort.

There is also a story about a couple of young boys that manage a farm and most of these story's show that anything is possible if you love doing it enough and have a bit of a number 8 wire mentality. If you have someone in your house that loves the farm like, this is definitely the dvd to get them and perhaps a copy for yourself.