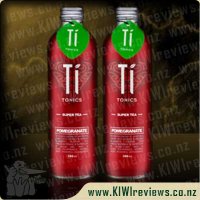 Every day we are exposed to harmful environmental toxins such as UV light and pollution. Rejuvenate and protect yourself with with our specially formulated blends, full of essential phytonutrients.

Ti-Tonics are advanced blends of natural tea extracts, fibre and plant polyphenols, designed to quench your thirst and nourish your body. Polyphenols are nature's most powerful antioxidants and protectants.

This Ti-Tonic combines green tea, grapeseed extract and fibre with the natural flavour of pomegranate to provide a delicious, antioxidant-rich superdrink.

The pomengranate ti tonic, was the 2nd in the 4 I was to try.

Upon opening it, I definitely noticed the smell. A fruity scent.

Having never tasted pomegranate before, it was surprisingly delicious. A lot thicker in texture than the other 3.

This one definitely quenches the thirst and have notice a calm sensation over myself since drinking it.

This is certainly one to try.

Ok another cold tea drink with a fruity taste.

Upon trying this though, I liked it a lot. It has a cool refreshing taste that balances well on the tongue. Another thing I like is the size of the bottle, big enough to satisfy a thirst without having a huge bottle that sits in the fridge taking up room cos you cannot finish it.

Only disappointment was the slightly furry feeling I got after drinking this (But I seemed to be the only one who had it, go figure??).

A very close runner-up for my favourite flavour. I can't say I have ever really considered pomegranate as a flavour of choice, but this really gave me something to think about. The slight dry bitterness of the polyphenols was noticeable, but hardly so, and the flavour of the pomegranate was strong enough to give real body, but still mild enough not to become overpowering.

The only thing that stopped this from being an equal to my favourite flavour - the Nectarine, was the slightly more detectable tea taste, which I just didn't think fitted quite as well. I have to concede that though this is far from a soft fruit punch as you would find in the supermarket or some snobby cafe, and has a strong background as a healthy beverage designed to assist the body fight cellular damage through oxidation and ageing, it also has a very strong mission to be tasty too, and the tea taste just took that slight edge off it in that regard for me.

Again, I used this to make a sorbet, one of my favourite summer treats, and the flavour was strong enough to come through without being so potent as to make it a "fruit ice". Using pears as a bulk base meant that this drink became the primary flavour, and also gave it a wonderful colour that looked so nice alongside the little scoops of Nectarine sorbet. It really was a delightful summer treat!

In short, another delightful drop, well worth trying if you want something that not only tastes good, but is good for your body too.

Writing this from both a product reviewer as well as a product formulator I have to say I was impressed on many levels.

From the formulation side I was impressed to have a great tasting product that not only contains a hefty shot of the important polyphenols as well as a healthy dose of dietary fibre and a decent ORAC score too.

As a consumer, I am presented with a beautiful bottle filled with a rich red liquid. The taste and aroma is seductive and after a long hard day formulating other people's products, it is nice to sample the fruits of someone else's labour. A big thumbs up to the team.
I can heartily recommend this to others - even if you are not a fan of green tea or chilled tea drinks. You will be surprised.

Never been a great one for teas, nor pomegranates really... so it was with great hesitation I tipped a chilled bottle of this to my lips and took a swig. The surprise was as refreshing as the drink.

A strong, full pomegranate flavour, with that slightly dry/bitter after taste I recall from past experience with berry skins (such as certain types of black grapes) but with a soothing, natural sweetness that made it slide down so smoothly I was keen for another gulp.

My mouth was left feeling clean and refreshed, but with a lingering berry flavour that lasted for a good 30 seconds after I had swallowed. I was a little worried about the texture of this one, as it had more sediment in it than the other flavours in the range, but after a good shake before opening mixed it all well, and there was no noticeable 'floaties stuck in my teeth' feeling after drinking.

Overall, an excellent drink, especially for the summer months. I found the 350ml bottle to be a good sized portion, giving me enough to quench my thirst, but without having any left to waste. I am tempted to make some of this into a sorbet with some pureed apples, but would want to know more about the effects of freezing on the phytonutrient chemicals before I go ahead and make some though, just in case I damage all 'the good stuff'.

My first impression was "Oh no, not another iced tea drink" as I find I cannot stomach them, but I was really surprised at how yummy this tasted and I really do love drinks that are pomegranate flavoured.

Also this is not an iced tea drink at all, it just has tea extracts and heaps of other great antioxidant properties.

I found upon drinking it that the flavour was very well balanced and did not disappear straight away like most drinks can.

I also found it tastes much better when really chilled and is very easy to drink. Before I knew it one bottle was gone.

Overall this is a great refreshing drink and I would choose to buy this over similar products any day - especially in the hot summer ahead.