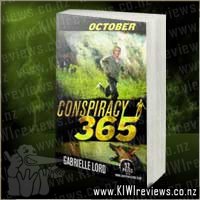 A gun shot rings out as Cal hides from his stalkers - two old bounty hunters and their savage dog, Sniffer. The hostile desert seems determined to become Cal's final resting place. Had Kelvin spared his life for nothing?

Back in the city, an impossible job looms. To break into Oriana's safe at Zurich Bank, Cal needs Boges to make a perfect copy of her fingerprint... and they need her PIN. But will stealing from Oriana force her to into a lethal alliance with Sligo? If so, Cal's enemies could instantly double in power, destroying his chances of survival. The clock is ticking. Any second could be his last. Callum Ormond has been warned. He has 92 days.

Yikes, just when you think you have a handle on how things are going to play out they go and give you a little kick saying don't get too comfortable, we're not done yet. This of course come in the form of the 3 allies performing a daring bank heist, and the possibility of Sligo and Oriana forming an alliance.

As seems to be common with this series, you have to suspend a modicum of belief in order to accept what the 3 juvenile allies are capable of achieving, but then if all books were based on fact, then they would all be very stuffy and boring indeed.

And I especially liked they way that the possibility of an alliance between the two main villains was used as a way to hint at another major player now getting involved. And it was also good to get a bit more info into Winter's back story and for her to discover some secrets of her own.

With October coming to a close, we are only two books from the end of this epic year-long saga, and what a journey it has been. Cal has been shot, bitten, committed, buried, drowned, betrayed and rescued so many times one could nearly get dizzy from trying to keep it all straight, but fortunately that is not necessary - the author reminds you if there is anything of vital importance in earlier books that is relevant to current events. I appreciate the subtlety with which this is done, however. Other than the brief recap of the previous month in the opening pages, all of the references are well placed.

October is the month for Cal to take on robbing a bank (who would have known three teenagers capable of such a feat?) but the thing I like most is that the clues are starting to come together. I really do want to know what this mysterious 'Ormond Singularity' is and I have a feeling next month Cal will be flying to Ireland to check it out for himself... exciting!

If you are reading this series, then October is a solid addition and if you are new, you probably want to go back to January and start from the top. A great series for young to teenage males - all action and mystery and no sidetracks into girlie things like 'romance'. I do appreciate that there is a strong supporting female character though - it does open the readership a bit and makes the whole thing just a little more intriguing.