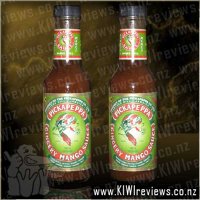 Deliciously tangy blend of mangos and ginger... just enough to get your taste buds dancing.

After trying other sauces in this range I had to remind myself that this wasn't going to burn my mouth beyond hope of repair. I decided to try this in a stir-fry - I know, how original huh? But before I added this sauce my wife had already added a standard 'off the shelf' sauce, so I tried it before adding this product and got the usual boring results, I then added the gingery mango sauce, stirred it through and recommenced eating the meal. The difference was instantly noticeable, the amount of flavour was wonderful and made even the smallest morsel of food tasty,the taste of mango came through nicely and added that fruity sweet taste to the meal which, when I had finished, left me wanting more. It certainly put to shame the other sauce that the others had to settle for and will definitely be used again.

I wasn't sure I would like the Gingery Mango sauce. I mean, no chillie? What was the point of a sauce without chillie?

I hasten to say I was proven wrong yet again. And not only that, I found another one SWMBO (she who must be obeyed) would like too. And my daughter, which surprised me further.

This sauce gives a different heat and spice when compared with anything with the chillie in it. There is a great warmth that is masterly balanced with the sweetness of the mango. The Mango adds the yin, to the ginger's yang. There is tanginess that adds a host of notes to any dish. I have had this on toast or crumpets (odd, I guess. But I love it) and added to stir fried dishes. I can thoroughly recommend its use in stir-fry dishes in place of bog-standard sweet chillie sauce. It raises a dish from the standard to the sublime.

This has to be one of the nicest sauces I have come across. The bottles in comparison to other sauces available are slightly smaller, however I dont think you need to use quite as much as you normally would.
The labels are not hugely appealing, if not somewhat faded looking, which makes you wonder if the contents will be a bit boring like the label, but this is not the case at all.
The flavour is absolutely divine and the price is well within budget.
Consistency and smell to are yum and very appealing, unlike some sauces where the smell can instantly turn ones stomach.
Definitely worth it in my opinion and further more even our children loved this one (aged 4-10yrs)

This was a really pleasant alternative that I probably would not have given a second glance at as I walked the supermarket shelves - mainly because the label is deceptively bland - something you could NOT justifiably accuse the contents of being.
The strong ginger flavour really seemed to poke through the spice for me, giving it a delightful tang that offset the sweetness of the mango perfectly. Though I am not a great fan of ginger in any form outside of baked goods (try adding some freshly grated ginger to your next fruitcake recipe, if it doesn't include it already) this was something utterly inspiring.
After trying it on pork, steak and on toast under a portion of savoury mince, I made it into a range of dips and spreads using things like cottage cheese, cream cheese, reduced cream, etc. It also made a really nice sandwich-spread when mixed with some tuna and finely grated tasty cheese.
All in all, this is something you really should try, even if only once. It's not that expensive, and if you can't find it in your local store, it's worth checking the official website for details. You can even email the boss there and he'll let you know your nearest retailer, or send you some direct if you mention you read about it here.

Ohhhh this one is a real yummy one, two great accompanying flavours mixed together in a delightfully tasting sauce.

This one almost reminds me of a slightly tangy mango chutney without the chunks, in fact it went really well with a nice serving of corned silverside. Or even with some cold roast beef or lamb sandwiches

I just can't get enough of these sauces and this is yet another one that will make it's way onto the shopping list.

Another great, versatile sauce with a stunning fruity-spicy flavour that leaps up and down on your tastebuds screaming "YOU LIKE ME, JUST ADMIT IT!"

Not usually a great fan of ginger except in baking, but this was a really tasty exception! It transformed into something wonderful when mixed with any of the following: cream cheese, mayonnaise or tartare sauce.

This one really took me surprise when I added a layer of it to some pan-fried toasted ham-cheese-pineapple sandwiches... it really added a delightful, fruity, spicy kick that complimented the sweetness of the pineapple and 'umami' of the champagne ham.

Overall, another 'almost perfect 10' because, though I adore this sauce, it simply didn't quite beat out the 'Spicy Mango Sauce', and it's still hard to find in bigger chainstores - probably because of the restrictive mark-ups such stores demand.

Beautiful, just beautiful!
What else is there to say? This sauce has a wonderful taste that makes you believe it's a hot sauce, but without the heat.
My partner(who won't eat hot sauce) likes it too.
This sauce has a nice, clean, fruity taste with just a hint of spice from the ginger that really brings out the flavours of whatever it has been added to.
Recommend mixing with cream cheese for an excellent different dip experience.

Crispy crackers with a sprinkle of sea salt.