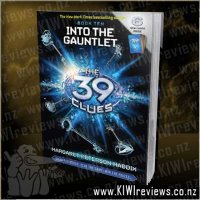 Throughout the hunt for 'The 39 Clues', Amy and Dan Cahill have uncovered history's greatest mysteries and their family's deadliest secrets. But are they ready to face the truth about the Cahills and the key to their power?

After a whirlwind race that's taken them across five continents, Amy and Dan now face the most the difficult challenge yet - a task no Cahill has dared to imagine.

When faced with changing the future of the world, can two children succeed where 500 years' worth of famous ancestors have failed?

Well here we are the final book in the thrilling saga of Amy and Dan Cahill and their quest to locate the 39 Clues which will grant the winner(s) the great power of the Cahill's.

I was a bit surprised when I saw that the last book was written by a newcomer to the series, but on further investigation I discovered that she is well suited to write the final book having written some very successful children/teens series before. Also once I started reading any fears I still had were quickly allayed as the story style was much the same as all the previous books.

As I mentioned this is the final book in the series and so obviously this wraps up the entire series storyline. In this story we see the outcome of the Madrigals plan to reunite all 5 branches of the family, it also sees Amy and Dan racing to beat the head of the Lucian branch from winning the race for the clues and quite possibly destroying the world, talk about 'no pressure'.

Overall a great conclusion to a thrilling series and with the hinting of a possible second series, it was made even better.

A stunning finale to what has to be one of my favourite children's series. I am proud to say that I have introduced it to my entire family and they are now competing over who has which book first.

The basic story follows two children who must compete against distant relatives for a mysterious 'grand prize' by collecting all 39 clues. In this final instalment, they race to stop the head of the Lucian branch from winning and gaining the power to pretty much destroy the world. It is an exciting journey, fuelled by what they have learned over the previous nine instalments and full of fun surprises.

It is the simplicity of the overall plot which I appreciate. The message is that all the different branches have to forgive each other and work together, and while that might sound cheesy on the surface, it is all pulled off with such genuine sincerity that you can't help but agree. I appreciate the challenge it must have been, for all these different writers to collaborate on a project of this size, especially with such tight deadlines, but it certainly worked and I can't wait to see the movie version (if they ever make one).

At last, the final instalment - the culmination of all that has gone before, all that we have read since November 2008.

In this thrilling conclusion, we see how the Madrigals' plan to reunite the various branches both falls apart, and succeeds beyond all expectations. We are also presented with the possibility of another series, following on from this tale.

Dan and Amy have to find a way to face all the disasters and trials that have overcome them previously, to come to terms with the deaths they saw happen, and those in the past whose details they become aware of.

The cards that come with this pack form a level 4 puzzle, which leads you to the last of the clues. Once you have solved it you are presented with a 40th 'clue' - which you need to return to the website on the 28th of September to solve.

Overall, this is a stunning rounding-off for this series, and it had some amazing adventures in it's own right. It was also the longest title in the set and though written by a completely new author (new to this series that is) it still manages to retain the same 'common flow' as all the others. For those who have been enjoying the series thus far, this is indeed just the kind of ending you have been waiting for.