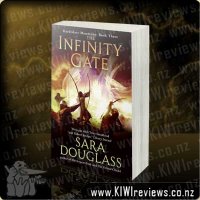 Tencendor is no more. The land is gone. But a few SunSoars still remain, and a new foe walks the world.

Ishbel Brunelle, priestess of the Serpent Coil, and Maximilian, the Lord of Elcho Falling, have raised the magic of Elcho Falling, and found new allies against the darkness in the mysterious Lealfast. And more crucially still, Axis SunSoar, former god and current hero, has rediscovered the magical Star Dance and revived his legendary Strike Force to push back the evil hordes commanded by the DarkGlass Mountain.

But their enemy grows stronger through blood and betrayal, the Lealfast have their own agenda, and when unexpected treachery threatens, Axis SunSoar must face a darkness greater than any he has ever known.

I have been looking forward to reading the final book in this saga for some time and one thing I can say for sure about Sara Douglass is that she writes some pretty epic sagas. The 'final battle' took up most of this third book with it's intricacy and heart pounding action, much like the final book of the The Wayfarer Redemption.

Throughout this trilogy, I have really appreciated the character of Ishbel - priestess, queen, but ultimately just a really brave and sensible woman. She is by far the hero of this series and the one on whom the fate of the world really rests (though it takes the guys some time to figure this out).

I love Sara Douglass' imagination, her attention to detail and ability to revisit the same places and people in a totally consistent, but revitalizing way. In the tradition of epic fantasy, she has many central characters, but she manages to keep them distinct enough and introduces them so skillfully that they enrich, rather than confusing the readers.

Probably better for an adult readership, this series is a solid contribution to the fantasy-saga genre and not to be missed, especially if you have enjoyed previous Douglass books set in this world.

Summers span decades. Winter can last a lifetime. And the struggle for the Iron Throne has begun. It will stretch from the south, where heat breeds plot, lusts and intrigues; to the vast and savage eastern lands; all the way to the frozen north, where an 800-foot wall of ice protects the kingdom from the dark forces that lie ... more...