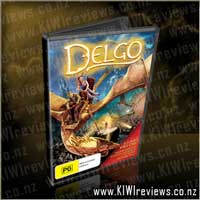 In a divided land, it takes a rebellious boy and his clandestine love for a princess of an opposing race to stop a war orchestrated by a power hungry villain.

Delgo, an adventurous dreamer but naive teenager, must rally his group of troubled youth and some unlikely friends to protect their world from conflict between the terrestrial Lockni people, who harness the mysteries of the land. And the winged Nohrin people, who rule the skies.

They live - segregated - in an uneasy peace until Delgo was framed for a crime he did not commit. After enlisting the help of an unlikely friend to escape a Nohri prison, Delgo discovers Imhoff is in danger so he must unite the two races against a common foe.

One of the most worthwhile things I have ever picked up from sci-fi was a line from 'Babylon 5' - it went something like this: "Truth is a 3-edged sword. There's your story, my story, and what really happened." This movie is a perfect example of this policy in action.

Rendered in AutoDesk Maya this movie reminded me, in terms of visual style, more of Shrek 2 than anything else, with even the 'bad guy' (who in this case is the King's sister) reminding me strongly of the Fairy Godmother of Far Far Away.

However, in terms of storyline, it is far more detailed and deep, with more than a few twists and turns, some good drama, humour, intrigue and even romance. The characters are well developed, at least in personality if not so much in rendering quality... but then it's not exactly one of the major blockbuster budget titles on the market. The odd jaggy polygon here and there does nothing to diminish the movie itself... just adds a little entertainment for those with a keen eye or an itchy pause-button finger.

The creatures in the story are also worthy of note... with my favourite definitely being the Razorwing - the functional equivalent of a horse - used for both casual travel and battle. The set and scenery is well designed, down to the smallest details, including the amazing gravity-defying glowing rocks that the Stone Sages (semi-religious ruling order of the ground-based Lockni) are masters of.

Overall, a great movie for the kids, with plenty of action and battle scenes for the boys, and some gooey romantic scenes for the girls. Well worth looking at purchasing, since it is $15 cheaper than 'normal DVD pricing'.

Although his life is already in a downward spiral, things get much worse for advertising executive Joe Doucett (Josh Brolin) ; while drunk one night, Joe is kidnapped and thrown into solitary confinement in a bizarre, hotellike room. For the next 20 years, Joe suffers unimaginable torment, but the motive and identity of his captor remain unknown. When he is inexplicably set free, Joe emerges with one goal: to find the person who stole two decades of his life.